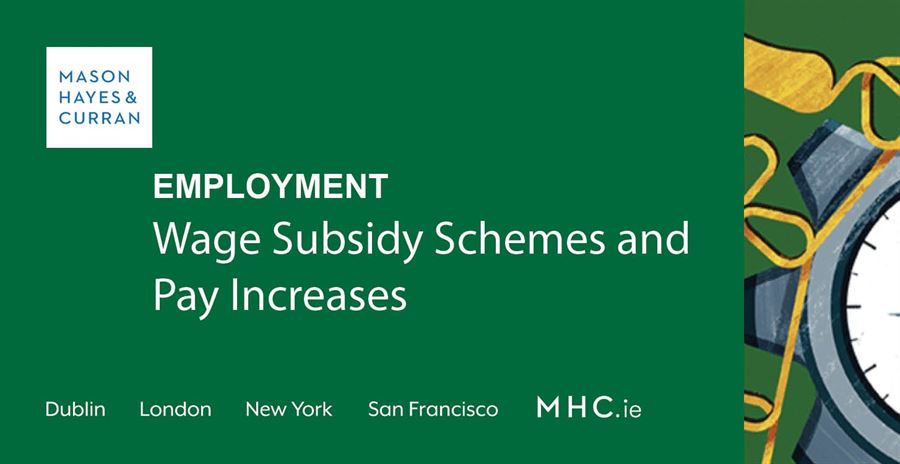 Despite the ongoing COVID-19 pandemic, the Labour Court has upheld claims for a pay increase made by workers employed by a laundry firm participating in the Temporary Wage Subsidy Scheme (TWSS). The Court said that the economic consequences of the current pandemic “are not uniform” and that each case must be examined “on its individual merits.”

TWSS was a government scheme introduced in response to the pandemic, to assist employers with keeping employees on the payroll, even if they were unable to work or on reduced hours. TWSS was replaced by the Employment Wage Subsidy Scheme (EWSS) in September 2020.

In a recent case, Berendsen (Ireland) Limited T/A ELIS V Seven General Operatives[1], the Labour Court acknowledged the financial impact of the COVID-19 pandemic but emphasised that payment claims still need to be assessed on their individual merits.

The workers’ eligibility for the scheme was not brought into question, as it was noted that on a whole, it appeared that the employer's business unit met the scheme requirements. However, the workers in question worked on two of the employer’s contracts with hospitals, which had not reduced in value. The Court also considered it to be significant that this particular pool of workers had always been treated as a stand-alone bargaining unit for the purposes of pay.

The workers had not received a pay increase for 12 years. They were represented by SIPTU, who had lodged a pay claim in November 2018 for a 4% increase in pay. SIPTU had previously rejected an offer by the employer to provide all staff with a 2% pay increase from January 2019. Following discussions at the Workplace Relations Commission, an improved offer was made by the employer to the workers covered by the claim, comprising of:

Despite the employer’s arguments that the business was severely impacted by the pandemic, and that the workers in question were being supported by TWSS, in consideration of the factors outlined above, the Labour Court recommended that the workers’ pay be increased. However, the Court could see no basis for an improvement of the offer previously made by the employer and made a recommendation that the offer be accepted by the workers in full and final settlement of their claim.

Employers must be aware that participation in the COVID-19 government supports do not justify a blanket dismissal of pay related claims.

The circumstances of this case are unique in that an easily identifiable part of the business could show that it had not suffered financial loss as a result of the pandemic. Also, the workers had not received a pay increase for 12 years.

Of course, if pay claims are received from a number of different units within a business, and the response to those claims is determined on the basis of how those particular units were impacted by the pandemic, rather than a blanket approach being adopted, this may result in a cohort of employee relations issues that will need to be managed delicately by employers.

Although a recommendation to uphold pay increases will only arise out of very particular circumstances in the current economic climate, employers must give careful consideration to the merits of any pay issues raised by employees.

We invite you to contact a member of the Employment and Benefits Law team should you require assistance in relation to any of the matters outlined above.