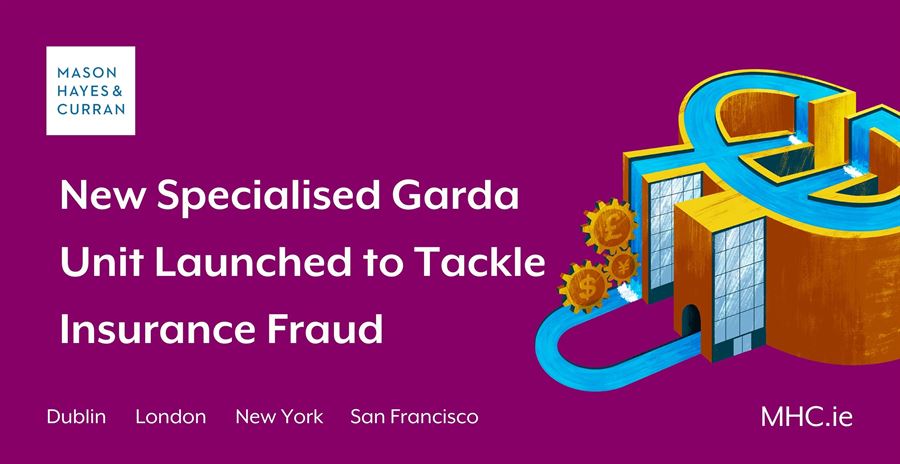 The new Insurance Fraud Coordination Office (IFCO) was established by the acting Minister for Justice, Heather Humphries, and launched in September 2021. IFCO is a new dedicated unit of An Garda Síochána specifically entrusted to deal with complaints of insurance fraud. The unit will operate under the remit of the Garda National Economic Crime Bureau (GNECB). The aim of the IFCO is to secure more prosecutions against those who commit insurance fraud. This, in turn, should create a deterrent effect and ultimately lead to less instances of insurance fraud and lower insurance premiums.

The need for the establishment of a dedicated fraud unit was highlighted by Mr Justice Nicholas Kearns in his “Cost of Insurance Working Group” report published in January 2018. It was initially proposed that the unit should be funded by insurance companies. However, this idea was not pursued because it could have raised valid questions regarding the independence of the unit.

A new “Memorandum of Understanding” has been agreed between the insurance industry and the IFCO. It is understood that this Memorandum will replace the current protocols contained in the “Guidelines for the Reporting of Suspected Fraudulent Claims”, which was last updated in January 2018.

This new Memorandum contains eight separate headings and will form the basis of any future complaints from insurers to the IFCO. A complaint of insurance fraud will now have to be made on the relevant reporting form directly to IFCO, rather than the Superintendent, where the suspected fraud occurred. However, where a complaint involves the use of false/forged no claim bonuses, driving licences, verification documents or concerns the provision of false information to obtain insurance, a complaint must be made to the relevant Superintendent.

The remaining provisions regarding the practical process of finalising the reporting of the complaint and supplying the Gardai with the relevant proofs has not substantially changed from those outlined in the Guidelines for the Reporting of Suspected Fraudulent Claims.

More importantly, the Memorandum now mandates that IFCO will register every complaint on PULSE and provide the complainant with a PULSE incident number. In particular, this development should ensure a more accurate process for the proper recording and public reporting of the number of complaints made and investigated. It was recently quoted in the media and in several Dáil debates that the reported number of 46 complaints of insurance fraud had been made by all insurance companies in 2020. This was down from 63 complaints in 2019. These figures represent the actual number of claims registered on PULSE by the Gardai for 2019 and 2020. However, these figures grossly misrepresent the number of suspected fraudulent claims actually being reported by insurance companies, most of which were incapable of being registered on PULSE until recently, or simply were not registered on PULSE by the Gardai for various reasons. The reported number of 46 complaints is also wholly inconsistent with the figures outlined by Deputy Commissioner Twomey in a meeting with the Joint Committee on Finance, Public Expenditure and Reform held in July 2019. In that meeting, Deputy Commissioner Twomey outlined that the Gardai had received 1500 – 2000 complaints of insurance fraud in the preceding three-year period.

It has also been reported by various media sources that the GNEBC is training up to fifty officers a year in specialist fraud investigation techniques. However, a formal roadmap for the IFCO has not been published. Therefore, the finer operational capability and aspirations of the unit, and the actual amount of Gardai that will be allocated to resource IFCO, remains very vague.

The introduction of IFCO closely follows the enactment of the Criminal Justice (Perjury and Related Offences) Act 2021, which provides a clear and statutory definition of perjury. This legislation gives significant teeth to the mechanisms contained in S14, S25, and S26 of the Civil Liability Act, 2004. It also makes it easier for IFCO to prosecute those who lie on oath during the claims process or at trial. Cumulatively, these reforms should increase the level of prosecutions and create a deterrent effect on anyone considering pursuing a fraudulent claim. Ultimately, if successful, these reforms should help reduce the costs of premiums.

The introduction of the IFCO has been welcomed by insurance companies and representative industry bodies alike as another positive step in the fight against fraudulent claims. Hopefully, sufficient resources are allocated, and a clear road map is devised to outline and underpin the growth and success of IFCO. The fact that all complaints of insurance fraud will be registered on PULSE will provide a more accurate reflection of the number of fraud claims actually being reported and investigated. This process will also provide a more transparent basis to measure whether any meaningful success is actually achieved by IFCO in tacking these complaints. The success of IFCO will ultimately be measured against the level of prosecutions obtained. Only time will tell if IFCO has any meaningful effect on the level of successful prosecutions or whether the changes will equate to a mere rebranding of the status quo.

For more information, contact David Culleton, or a member of our Insurance and Risk team.

Life Beyond SEAR - What Next in Financial Regulation?

The Senior Executive Accountability Regime – What Does it Mean for Regulated Entities?

Out of the Ordinary? The Test for Summons Renewal