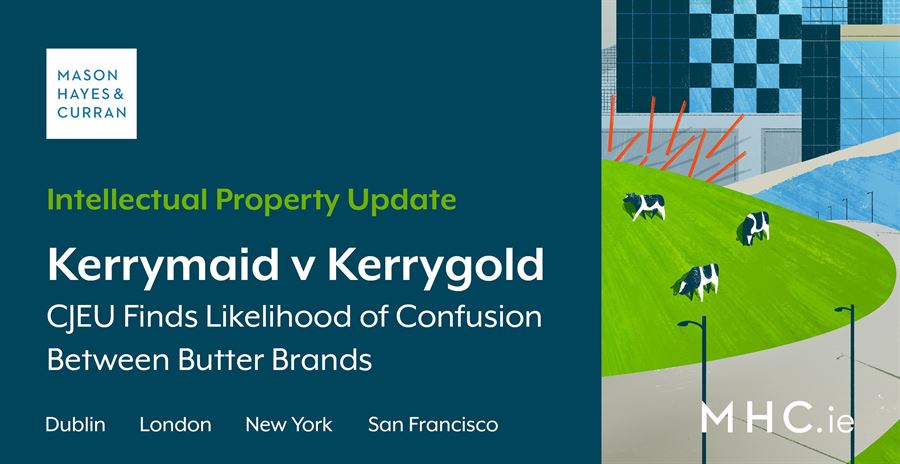 A recent judgment by the Court of Justice of the European Union (CJEU) has held that Kerry Group cannot register the word mark “Kerrymaid” as a European Union Trade Mark (EUTM). The case arose as an appeal by Kerry Group of a European Union Intellectual Property Office (EUIPO) decision in July 2019 to refuse registration of the “Kerrymaid” trade mark on dairy products including butter. Kerry Group’s appeal was unsuccessful. The CJEU ruled that the EUIPO was correct to find that there is a likelihood of confusion on the part of non-English-speaking consumers in the EU regarding the two trade marks. This decision represents a huge victory for the “Kerrygold” brand and its owner Ornua. It also serves as a reminder to brand owners that brand recognition will not automatically be granted as uniform across the entirety of the EU.

On 28 June 2011, Kerry Group applied to have “Kerrymaid” registered as a EUTM for cheese, butter, dairy products, snack foods, sandwiches and other goods in Classes 29 and 30. The application was opposed by Ornua on the basis of its 18 earlier registered trade marks for “Kerrygold” for the same goods. The opposition was upheld by the EUIPO due to the pre-existing EUTM for “Kerrygold” below.

Kerry Group appealed the EUIPO Opposition Division decision. Ultimately that appeal was dismissed by the EUIPO Fifth Board of Appeal, which found that the competing trade marks overall had an average degree of visual and phonetic similarity. The Fifth Board of Appeal was satisfied that there was a likelihood of confusion for the goods concerned, i.e. butter products. The Fifth Board of Appeal also held that the peaceful co-existence of the two marks in Ireland and the UK did not mean that there would not be a likelihood of confusion on the part of the relevant public in the EU, who would be unaware of the geographical reference contained in the term “Kerry.”

In a further appeal to the European Court, Kerry Group argued that any similarity between the two marks was “at most, low,” whilst also claiming that “Kerrygold” did not have a strong distinctive character. It suggested that the term “Kerrygold” associated with butter and dairy products would be perceived by the relevant public as an indication of their geographical origin and should therefore not be registrable. Itargued that Kerry is a well-known destination among European travelers and has traditionally been one of Ireland’s premier tourist destinations. Moreover, it argued that the two brands at issue had coexisted peacefully in Ireland and the UK since 1990, without any difficulties or confusion arising.

The CJEU agreed with the EUIPO that Kerry Group’s arguments on the alleged knowledge of the term “Kerry” were mostly valid for members of the European public who live in Ireland, who visited Ireland, or indeed who live in the UK due to the latter’s proximity to Ireland. On the other hand, there had been no evidence provided to prove that the term “Kerry” would be understood by members of the European public who do not live in Ireland or who have never visited Ireland, as a reference to county Kerry. By way of example, it said that the word “Kerry” could also be a first name or a family name.

In addition, the CJEU found that:

Ultimately the Court commented that the use of the common element in both signs, ‘Kerry,’ could lead consumers to think that the “Kerrymaid” mark was an additional version of the earlier “Kerrygold” mark.

The CJEU decision is undoubtedly a set-back for Kerry Group and a win for Ornua and its Kerrygold brand, which is a dominant brand in Ireland, Germany, and the US. Ornua’s concern in the case was that the use of a very similar mark to “Kerrygold,” in relation to butter and dairy products in markets such as Germany would result in a “blurring” of its brand. The European Court appears to have empathized with this concern.

Whilst the two brands will continue to co-exist in Ireland and the UK, the position remains that Kerry Group do not have a registered EUTM for “Kerrymaid.” It is likely but remains to be seen if this decision will have any adverse consequences for other EU food brands whose names contain a direct association with specific geographic locations.

For further information, contact a member of our Intellectual Property team.