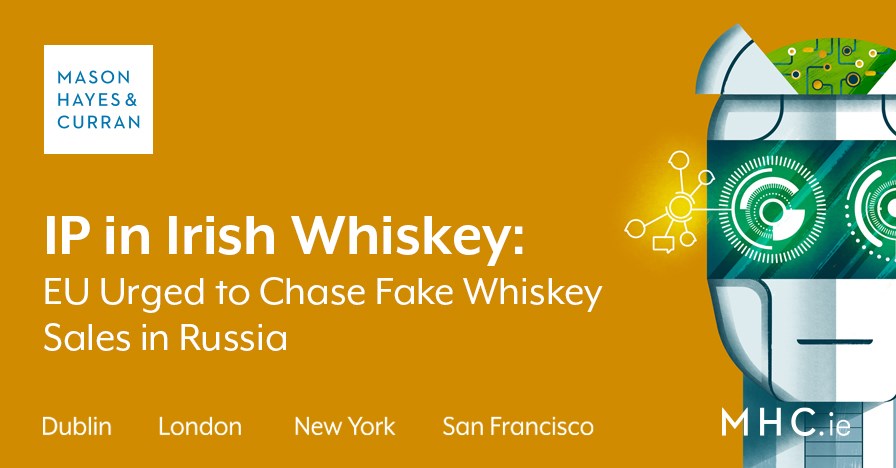 The Irish Whiskey Association (“IWA”) has exerted significant pressure in recent weeks on the EU in its efforts to vindicate the IP rights held in Irish Whiskey. In particular, its efforts have centered on the need to combat the sale of ‘fake Irish whiskey’ in Russia. The industry body has sent lengthy submissions to the EU’s trade policy review and to the bloc’s review of IP rights calling for a move to enhance the strength of IP protection for Irish Whiskey. Given that Irish Whiskey, together with Irish Cream Liqueur and Irish Poitín enjoys the status of Protected Geographical Indication (“PGI”) at EU level, it will be interesting to see how the EU responds to these latest calls for action against counterfeits.

Irish Whiskey, Irish Cream Liqueur and Irish Poitín are registered as PGI’s under the EU Spirit Drinks Regulation No 110/2008. PGI’s are IP rights used on products that have a specific geographical origin and possess the qualities, reputation or other characteristics that are attributable to that geographic origin. For a product to become registered as a PGI, the link between the product and place does not need to be a core attribute of the product, however production must still take place within a defined geographical area and the product must still possess a sufficient level of quality and reputation arising from a sufficiently specific set of characteristics attributable to that area.

For Irish Whiskey, this means that it must be produced on the island of Ireland in line with approved technical files. For example, it must be distilled and matured in wooden casks in Ireland for at least 3 years. The technical files which were submitted by industry together with the Department of Agriculture, Food and the Marine in 2014, defined the distinctive types of Irish whiskey - Malt Irish whiskey, Pot Still Irish whiskey, Grain Irish whiskey and Blended Irish whiskey for the first time and set out the unique production methods for each type.

Counterfeits arise, particularly in international markets, where products are wrongly advertised, packaged, displayed or named in a way that they appear to be Irish whiskey. Indeed, there are many ways that consumers can be led to believe that a product is genuine Irish whiskey, such as:

Such practices clearly represent an infringement of the PGI status of Irish whiskey. Ultimately however, that PGI status is only as strong as the enforcement which is applied in those jurisdictions where the infringing activity is carried out.

Irish whiskey is the fastest growing premium spirits category in the world. According to IWA statistics, global market share is set to grow by 300% by 2030 to 12% and by 2025, production is set to rise by 41% from 2010 levels. With these increased levels of growth and performance however, there also arises increased levels of IP infringement and the increased use of misleading products.

Currently, after the US, Russia is the second-largest export market for whiskey, accounting for some 606,000 cases in 2019. In the last year, the IWA discovered 6 fake Irish whiskey brands in Russia, 3 of which were produced in Belarus. It sought to have the products removed from shelves however the Russian authorities failed to take action. In response, the IWA issued cease and desist letters to the relevant companies and retailers selling the inferior products, which did ultimately lead to them being removed from the market.

In terms of enforcement, the aspiration is that registration as an EU PGI will lead to mutual recognition by third countries and the corresponding ability to enforce the PGI outside of the EU under international trade agreements.

A recent success story in this regard is the free trade agreement between Vietnam and the EU which entered force on 1 August 2020, and which recognised and protected PGI’s for over 200 products, including Irish Whiskey. On the other hand, the Russian example demonstrates the necessity for and importance of co-operation between the EU and non-EU countries to adequately address this problem of infringement. In light of Brexit, the need for new proposals has now taken on a new significance to prevent fake Irish whiskey products being produced in a non-EU State and then being transited through the EU.

Although PGI status clearly does provide the strongest possible protection against infringement, and equally provides a basis for enforcement action against misleading products, all eyes are now on the EU to see what more can be done to ease the concerns of the Irish whiskey industry

For more information contact a member of our Intellectual Property Law team.