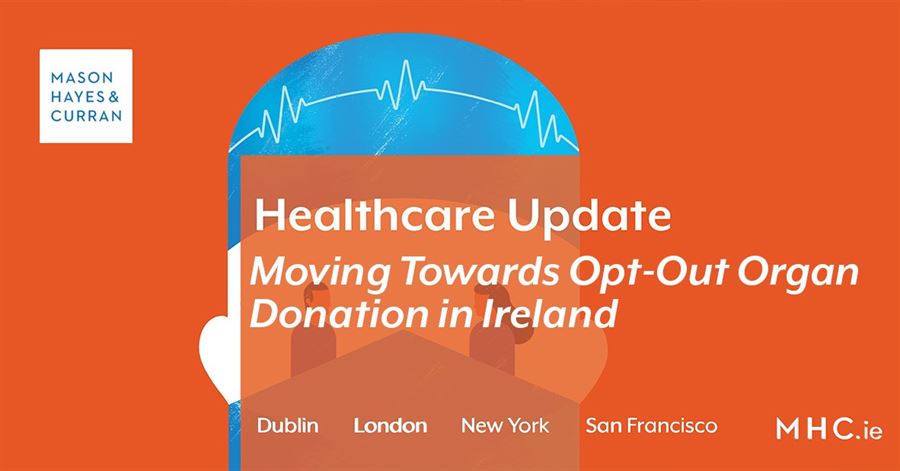 The proposed Bill seeks to implement a system whereby a deceased person is presumed to have consented to donate their organs unless the contrary can be proven.

It will also allow for altruistic kidney transplants for the first time in Ireland.

The most significant aspect of the proposed legislation is the introduction of a new ‘opt-out’ system of consent for organ donation in Ireland. Under the proposed changes, a deceased individual’s organs will be donated, where possible, unless it can be shown that the deceased did not consent to the use of his or her organs.

The proposed Bill will facilitate the creation of an opt-out register. In the event a deceased individual has registered their wish not to become an organ donor on the register, the deceased’s organs will not be transplanted and the deceased’s next-of-kin will not be consulted.

It is worth noting that during the proposed Bill’s consultation process, it was suggested that an opt-in register should operate alongside the proposed opt-out register. Signing up to the opt-in register would prevent next-of-kin overruling a deceased person’s wishes to donate. Ultimately, this suggestion has not been implemented.

Under the existing system the decision rests with the next-of-kin, even where the deceased person has an organ donor card or indicated their wish to be an organ donor on their driving licence.

The overhaul in practice aims to improve the State’s rate of organ donation. You are currently three times more likely to require a transplant than to be an organ donor in Ireland.

It is important to note that the proposed Bill does include what the Minister for Health describes as a ‘soft’ element. The next-of-kin of the deceased person will continue to be consulted and have a veto on any proposed transplant. If the next-of-kin objects to the donation the donation will not proceed.

The proposed Bill outlines a ranking system of next-of-kin, with the spouse of the deceased person ranking highest. If equal ranking members on the next-of-kin hierarchy are unable to agree on consent, the transplant will not proceed.

The proposed Bill strives to change this by allowing living kidney donors to make a donation to the transplant pool without directing their donation to a specific person.

Organ Donation Transplant Ireland has welcomed the progress of the proposed Bill. Ireland remains among a minority of EU countries not to have implemented an opt-out system of organ donation. The system has increased donation rates in other jurisdictions and European organ donation rate rankings are consistently topped by countries that have an opt-out consent system in place.

It is also estimated that up to five altruistic transplants annually could take place upon enactment of the proposed Bill and accordingly additional resources will need to be put in place to deal with this increase.

The proposed legislation, first recommended 12 years ago, must now be considered and debated by the Oireachtas. We look forward to monitoring its progress.