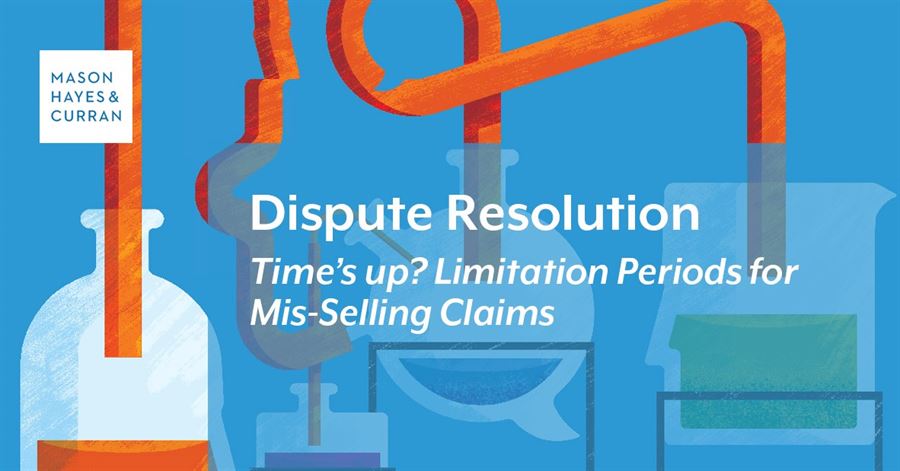 Mis-selling claims against financial institutions usually involve allegations of negligence in the provision of products or services, for example, that information was misrepresented prior to purchase or that the product or service was unsuitable for a customer’s specific needs.

Such claims, like any other, must be issued within a prescribed “limitation” period following the accrual of the cause of action. A cause of action for breach of contract arises on the breach itself. However, mis-selling claims are often based on tort where, in this category, the cause of action accrues from the date damage is suffered. In such cases damage arises through financial loss but the complexity of financial products can make it difficult to determine how and when the loss arises.

A cause of action accrues when actual damage is suffered

In the leading case, Gallagher v ACC Bank plc[1], the Supreme Court held that a claim was statute barred because the damage was suffered at the time the plaintiff entered into the transaction. The plaintiff’s investment, in a bond promoted by ACC, was financed by a loan provided by ACC. The plaintiff argued that the investment was unsuitable as it would have had to out-perform the market for his return to cover the interest payable on the loan. The Supreme Court found the plaintiff had suffered damage by the very fact of entering into the transaction and so his cause of action accrued at the date of the investment. Mr Justice Fennelly commented that there will be cases of immediate loss, even if there are difficulties in quantification.

This decision was viewed by some as unduly harsh on claimants who may not become aware of the extent of damage suffered until after the six year time limit has expired. However, the court’s rationale was based on the case specifically pleaded by the plaintiff that the damage had occurred on entering into the transaction.

The “mere possibility” of loss does not equate to actual loss

The on-going case of Cantrell v AIB[2] concerns claims by a large number of investors in property investment schemes promoted by AIB, the so-called “Belfry Funds”. The High Court determined that the cause of action in negligence did not accrue at the date of entry into the investments as there was at that stage a mere possibility of loss but no actual loss. This decision is currently under appeal to the Court of Appeal.

Mr Justice Haughton distinguished the Gallagher decision on the basis that the plaintiff in that case was bound to suffer the loss of interest from the date of the investment. However, the value of the Belfry Funds “could have risen, or fallen but it could not be predicted at the outset whether they would go up or down in value, or that they might fail entirely”. He found that the mere possibility of loss is not enough – there must be some probability of loss.

Helpful principles can be gleaned from the cases discussed above in determining when financial loss arises. It is clear, however, that there can be no “one size fits all” approach, given the infinite variations of financial products and the manner in which those products create future profit or loss. Further, a cause of action in cases of mis-management of investments and divergence from agreed investment strategies may accrue long after the original transaction.

The Court of Appeal’s view of the Cantrell decision is anticipated in the coming months and is likely to provide further guidance on this topic.

For more information on the mis-selling of financial products, contact a member of our Dispute Resolution team.