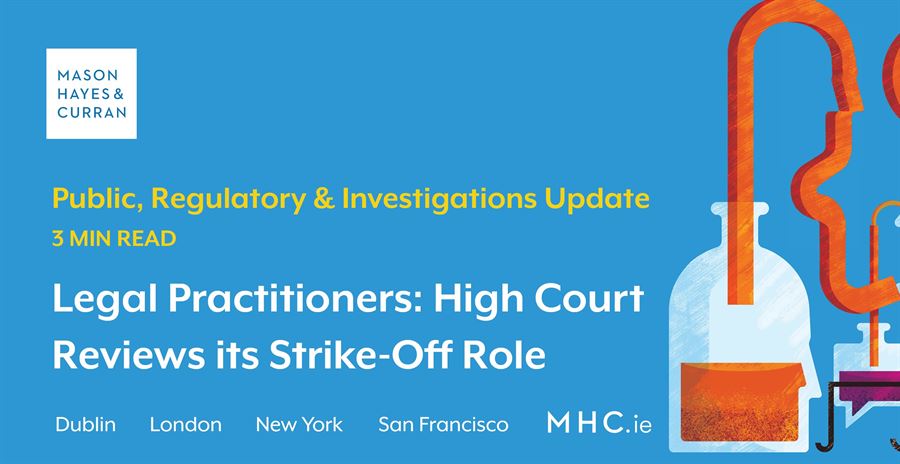 Recently, in Law Society of Ireland v Daniel Coleman[1], the High Court (the Court) provided guidance on the respective scope of:

In a judgment likely also to apply to all legal practitioners in the future, it confirmed that it can fully re-hear the matter if a solicitor actively appeals, but only review the matter in a much more limited way if he or she only responds to the ensuing strike-off application.

Based on findings of misconduct by the SDT, the Law Society brought an application to strike Mr Coleman’s name off the Roll of Solicitors. Mr Coleman did not appeal the SDT’s findings, but responded to the Law Society’s separate strike-off application. An issue was raised as to whether, and to what extent, he could challenge the merits of the misconduct findings in that context.

Role of the High Court

When the SDT makes a finding of misconduct and recommends a serious sanction, its report must be brought before the Court by the Law Society under the Solicitors (Amendment) Act 1960 (the 1960 Act) and an order providing for the serious sanction must be sought from the Court[2]. The Court’s jurisdiction on the application is set out in section 8 of the 1960 Act.

However, the matter may also come before the Court by way of a statutory appeal by the solicitor, under section 7(13) of the 1960 Act.

Therefore, in practice, where a solicitor exercises the statutory right of appeal, there will be two parallel motions before the Court. The Rules of the Superior Courts provide that, in those circumstances, the Court will hear the appeal first[3]. It will deal with the Law Society’s application after the appeal is decided, having regard to the outcome of the appeal.

In Coleman, the Court discussed its role in the context of both.

When the SDT makes a finding of misconduct against a solicitor, that solicitor has a statutory right of appeal to the Court against that finding. The appeal entitles a respondent solicitor to a full rehearing of the matter before the Court.

When the Court hears an application to impose a sanction, its role is much more limited.

For findings of misconduct to be set aside in the context of a section 8 review, either the Court itself must independently form the view, or the respondent solicitor must demonstrate, that the findings do not have a “sustainable basis”[4]. This “falls short of a full appeal [but] allows for any injustice to be brought to the court’s attention even in the absence of an appeal”[5].

Thus, the threshold test is akin to that in judicial review, and not whether the Court might itself have reached a different conclusion on the merits.

If a solicitor seeks to challenge misconduct findings as not having a “sustainable basis”, it must be shown that:

Unlike a statutory appeal, a section 8 review will normally be carried out by reference solely to the materials which were before the SDT. This is one of the essential differences between a review and a full appeal by rehearing. It is only in exceptional circumstances that the Court will allow further evidence, and it will only go to the narrow issue of the sustainability of the findings[6].

The Court’s decision in Coleman serves as a reminder that for a full rehearing on the merits, a respondent solicitor should exercise his or her statutory right of appeal.

Otherwise, his or her ability to question misconduct findings will be limited to submitting that they do not have a “sustainable basis”, in response to an application to the Court to impose the sanction recommended in light of the misconduct found. This is a high threshold.

Going forward, this also seems to be the case under the equivalent provisions of the Legal Services Regulation Act 2015, which applies to all legal practitioners and not just to solicitors.

Therefore, while the Court can hear from legal practitioners in relation to its review of recommendations on sanction, this will predominantly be in relation to the sanction itself, and there is only a very limited jurisdiction to entertain submissions relating to the sustainability of the underlying misconduct findings.

Therefore, legal practitioners should be mindful of the options following a disciplinary process, and the consequences of the choices they make regarding how they will respond.

For more information, contact a member of our Public, Regulatory and Investigations team.

[2] In re Solicitors Act 1954 [1960] IR 239. The decision to strike a solicitor’s name off the Roll of Solicitors involves the administration of justice, and accordingly, must be made by a court.

[3] See also section 85(1) of the Legal Services Regulation Act 2015, which makes similar provision for legal practitioners into the future.

[4] Citing, amongst others, the Supreme Court decision in Law Society of Ireland v Coleman [2018] IESC 80.

[6] See Law Society of Ireland v O’Sullivan [2018] IECA 228, in which the Court of Appeal confirmed that, in a section 8 application, a solicitor could not seek to cross-examine witnesses who had given evidence before the SDT, adduce new evidence or question primary facts found by the SDT. These were matters for a statutory appeal, which the respondent solicitor had not availed of.