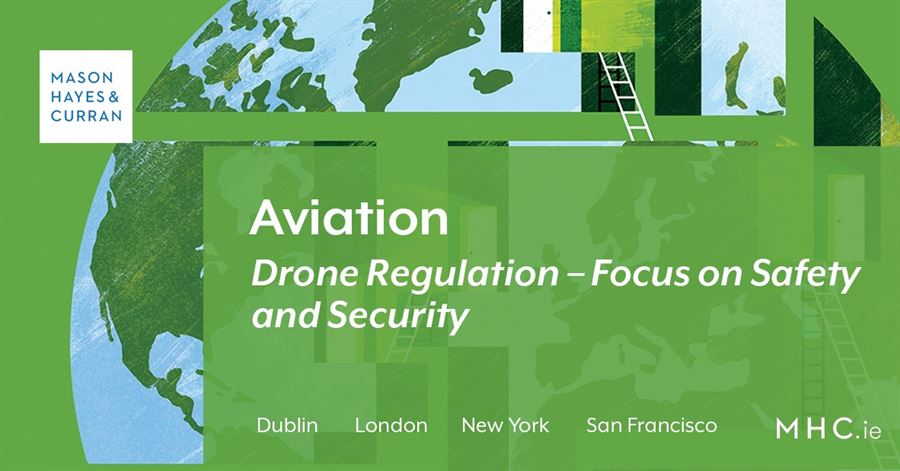 During the busy holiday travel season in December 2018, two drones were spotted flying within Gatwick airport air space. This sighting led to the repeated disruption and closure of the airport and cancellation of flights. Overall about 1,000 flights affecting 140,000 passengers were cancelled or diverted across three days leading to chaos. Another drone sighting occurred at Heathrow airport in early January 2019 causing the airport to shut down for over an hour due to safety concerns and on 21 February 2019 services at Dublin airport were temporarily suspended for a brief period following a drone sighting.

As part of its drone safety awareness campaign the Irish Aviation Authority has outlined 11 key things that you should not do when operating a drone including inappropriately using a drone camera. The operational limitations include amongst others, rules about operating a drone if it will be a hazard to another aircraft in flight and/or within 30 meters of any person, vehicle or structure not under your direct control.

Recent incidents relating to the operation of drones at large commercial airports have thrust the issues of safety, security and risk into the spotlight. In July 2018, we discussed how the EU-wide rules on drones would benefit the aviation industry. We examine the need to regulate and innovate in the areas relating to the use, operation and safety of drones, while balancing this with the need to permit some operational flexibility due to the increased use of drones across a variety of recreational and business areas.

In Ireland, the use and operation of drones under 150kg is currently regulated by the Small Unmanned Aircraft (Drones) and Rockets Order 2015 (2015 Order). A small unmanned aircraft is defined to mean an unmanned aircraft or a drone having a mass of 150 kilogram or less.

The 2015 Order does not apply to drones less than 1 kilogram maximum mass less fuel and constructed of wood, paper or frangible plastic and containing no substantial parts, when operated below 15 metres above the ground or water and in a manner that does not create a hazard to persons, property or other aircraft. Accordingly all drones over 1kg in weight must be registered with the Irish Aviation Authority.

The 2015 Order (s. 6 (7)) requires a person who has charge of the operation of a drone (without fuel but including any articles or equipment installed or attached and including cargo) to have successfully undertaken a course of safety training accepted by the Irish Aviation Authority for drones between 4 kgs and 25kgs.

Since 2015, drones have become more visible and commonplace and attracted more legislative attention. With a greater awareness of risk and safety, it may be time to review and revise the regulations for the benefit of enthusiasts and commercial operators.

In 2016, a private members bill titled Regulation of Drones Bill 2016 was allowed to lapse. The bill aimed to regulate the use of drones having regard for public safety, the privacy rights of individuals including rights attaching to ownership of private property; requirement for a knowledge test for drones of a certain size; insurance requirements; general and specific principles on the safe operation of drones; affixing code to drones to make them identifiable; a reporting service including mandatory reporting of drone loss, provision for seizure of drones and certain offences.

In 2017, a second private members bill titled The Small Unmanned Aircraft (Drones) Bill 2017 was initiated. It is currently before the House of Parliament (Dail Eireann). The bill proposes to lower the weight requirement of drones required to be registered with the Irish Aviation Authority, from 1kilogram to 250 grams. Notwithstanding recent attention and media related to drone use and operation in later 2018, the bill has not made it far in the legislative process. This may change as it has become more apparent to the general public that small drones are capable of causing significant disruption and inconvenience to the public and a particular security risk to people and property at airports.

The 2017 bill contains a number of provisions which expand and enhance operating limits and include an insurance requirement for commercial use operators and an offence for operating a drone without insurance. With the rising popularity of drones for business use, drone insurance for commercial operators is now available in the Irish market. Some examples of drone application in commercial settings include uses in agriculture and horticultural business, construction projects, facilities protection and monitoring, archaeological and geological exploration; film and videography and wildlife conservation.

Other jurisdictions are updating and reviewing drone laws and regulations. Canada recently enacted Canadian Aviation Regulations, Aeronautics Act section 602.41 Unmanned air vehicles. The Canadian legislation has a minimum age requirement to pilot registered drones of a certain size and conditions relating to competency and online tests before the drone can be operated.

At an EU level, the European U-space Demonstrator Network was successfully launched in October 2018. A new report on implementation of services for very low level (VLL) drone operations in the European Union was published in November 2018 by Eurocontrol. U-space project and initiative aims to create a system designed to connect all drones flying and make all drones visible for authorities and civilians across 28 EU member states. Eurocontrol will be part of the cell which will support the network to develop concrete material for U –space projects together with EASA and Sesar Joint Undertaking.

It will be necessary to strike a balance between drone user enjoyment and regulations which tend to impact on business use with due regard to the safety and security issues for drone operators, other aviation users and the general public.

With increased use and focus on artificial intelligence and unmanned vehicles and operatives across a wide variety of industries, the focus on regulators and participants should be to proactively engage in finding solutions and innovation to address user and operator related risks and embrace the potential for unmanned aircraft as one of the aviation industry’s most significant growth sectors. As new products come to and are welcomed into the market, the regulatory environment must expand to include them and such standard risk mitigation measures such as insurance, registration, training and testing and compliance requirements become part of the general user manuals and performance conditions.

For more information on the regulation of drones and its interaction with the aviation industry, contact a member of our Aviation, International Asset Finance team.