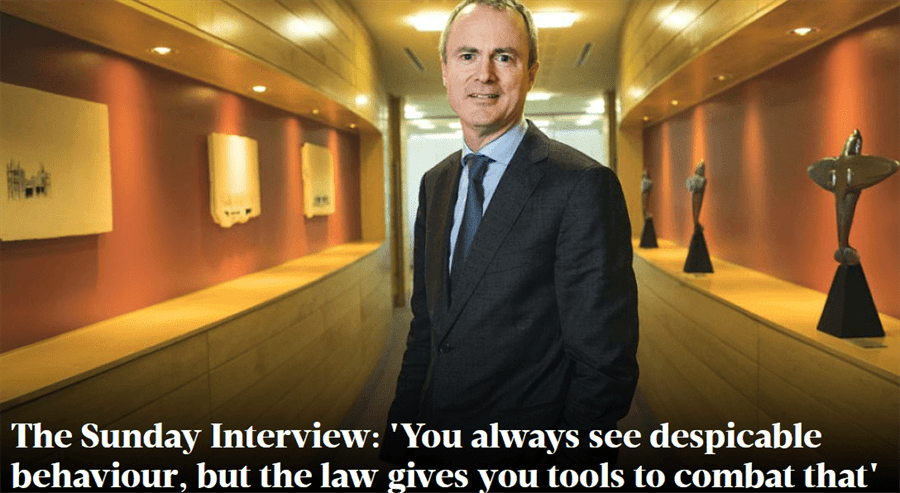 Lawyer Declan Black says that a top law firm is like a Michelin-star restaurant: simple to explain, but exceptionally difficult to execute

When Declan Black became managing partner of one of Ireland’s biggest law firms in 2014 he said he felt “a bit like Declan Kidney taking over from Eddie O’Sullivan” as coach of the national rugby team.

It may have been a throwaway comment about riding on the back of someone else’s success, but it captures some of the weight of expectation and fear of failure built into any handover.

Black need not have worried. Under his leadership, Mason Hayes & Curran (MHC) has remained on a strong winning streak. Staff numbers have grown to 420 and the blue chip law firm has just posted results showing a 7 per cent increase in revenues to €77 million last year.

It is down from the double digit growth of 2015, but it is a strong performance in a year marked by more challenging trading conditions.

On a personal level, Black’s colleagues have recently displayed their faith in his leadership by backing him for a second three-year term as managing partner.

If there was a time for self-deprecation, that moment has probably passed. In the legal rankings game, Chambers Global rates Black, an insolvency and commercial litigation practitioner, as “superb – excellent in negotiations, commercially aware, and very practical”.

His impressive CV includes representing the Moriarty Tribunal in various proceedings brought by businessmen Denis O’Brien, Dermot Desmond and others. He has also acted for Thema Asset Management in a €1 billion dispute with HSBC in the wake of the Bernard Madoff scandal.

After a short time in his company, it becomes apparent why you would have him in your corner. He is affable and polite without a hint of superciliousness. Strongly-reasoned views and a certain steeliness lurk behind the softly-spoken voice.

Sitting in the sixth floor consultation room of MHC’s Docklands offices with a view over the barges at Grand Canal Quay, Black describes himself as “open” and “very competitive” – words which would seem to chime with his view of the firm he currently leads.

For starters, MHC remains the only law firm in Ireland to post annual turnover – a step towards transparency first taken back in the dotcom era, in line with changing law practices in Britain. Private partnership law firms do not publish accounts, so this is as open as it gets.

So what is driving growth at Ireland’s sixth largest law practice?

“We’re a very diverse business so it came from a lot of different areas. Someone described it as a year of two halves. I’d agree with that,” he says.

That big black dividing line was of course the Brexit referendum. Because deal activity tapered as a result of the British vote to leave the European Union, MHC’s transactional practice also slowed down. According to Black, a strong showing in the firm’s contentious practice acted as a counterbalance to that.

There were, of course, some big corporate transactions. The firm advised on Activision Blizzard’s $5.9 billion offer for King Digital Entertainment, and Virgin Media in its takeover of UTV Ireland. But the future remains highly uncertain.

He sees clients, particularly in the financial services sector, struggling to make decisions with incomplete information. While Theresa May delivered some clarity on Britain’s intentions in her Brexit speech three weeks ago, it was essentially just “the outline of a negotiating position before contact with the other side”.

‘I think anyone who says they know what 2017 is going to bring is a very brave prophet,” says Black.

Whatever about the economics of it, Black sees Brexit as a political tragedy, a rejection of 70 years of international cooperation.

“It’s taken two world wars and innumerable conflicts. The evidence is all there that international cooperation and collaboration lead to better collective outcomes. You had a billion people pulled out of poverty during a period of globalisation, and now you have a return to narrow nationalism.”

Black believes Ireland is a logical destination for the mobile part of the financial services industry based in London. While there will be competition with cities such as Frankfurt, Madrid and Paris, fintech and the funds industry would find a natural home in Dublin.

He thinks the government has done fine on Brexit given that the British government “hadn’t a clue what it wanted” up until recently.

There are infrastructural issues such as housing to be worked out. He is quite passionate about the need for a proper public debate in order to arrive at some consensus on the type of country we want to live in, in five years’ time and in ten years’ time.

“Do we want to have the greater Dublin area growing and growing while rural towns struggle? It seems slightly preposterous to me.

“Should we prioritise upgrading the infrastructure that links those towns, and Cork, Galway, Waterford and Limerick, to Dublin so that those places which are really nice places to live in begin to be better positioned to compete for the economic benefits that can flow?”

Black’s desk can be found in a flexible work space on the first floor, among his co-workers. Despite being managing partner, he still togs out as a lawyer and finds that a well-designed open plan office is effective for collaborative teamwork.

“I do about 30 per cent client work. It makes me a better manager in my view and I also like it. When you’re managing lawyers it helps to be doing a lot of lawyering because then you understand first hand the pressure the frontline lawyers are under,” he says.

For Black, running a top law firm is analogous to running a two or three-star Michelin-star restaurant in that it is a very simple business to explain but exceptionally difficult to execute. Both are also extremely hands-on.

“If you don’t have inside you a service ethic, it’s hard to stay in the service business. Quite a few lawyers migrate out of it.”

Black, it turns out, is an MHC lifer. From Dublin, he studied law in UCD and started with the firm as a trainee in 1990.

Before that, there were typical student jobs – making ice cream, being a busboy – followed by six months working in a bank and a year-long spell as a travelling bookseller based in London, shifting a mish-mash of remaindered stock. He picks a random example: “One Hundred Famous Aeroplanes, was £15.99 now £5.99.”

The boss was a businessman called Zachary Kwintner.

“I’d ring people up and say ‘It’s Declan Black from Zachary Kwintner Books’, and the confusion on the other end of the line was incredible.”

That brief moment of puzzlement over the unusual name combination gave him just enough of a window to cut in with his pitch. He reckons he was a good salesman three days out of five.

His territory included the North. This was the late 1980s, so Black gained first-hand experience of the hard border and the cordon around Belfast city centre. Border control was not sure what to make of the southern accent and the English-registered car full of boxes of samples.

“We had a wonderful Irish solution. One of the bookshop owners was in a relationship with a senior RUC officer so he used to clear the way for me. This is absolutely true. I got the wave through.”

The lure of the family trade finally called. He lists off what sounds like a production line of Black lawyers. Even his wife is a solicitor.

He is sure that his father, who worked as a solicitor in Bank of Ireland for a while, put in a good word for him at MHC. That was then. The firm has a strict “no lobbying” policy.

He describes his area of expertise, commercial litigation, as “very sharp-edged”.

“You see an awful lot of what people are really like. You go well behind the sort of marketing platitudes. It’s very interesting. High stakes litigation can be very personal.”

He started off in insolvency law. Talking about it sparks an enthusiastic reflection on the important role of failure in the capitalist system.

“The aim of an insolvency system should be to get assets away from people who can’t afford to exploit them and into the hands of those who have capital. The whole examinership process is based on that premise.”

Shareholders get wiped out. Creditors share the pain. The company survives. It is a collective win.

“I think we fail in our focus. We get obsessed by individual stories of hardship instead of saying let’s have an objective to have fewer stories of individual hardship, recognising that we have some and putting in place appropriate supports for the individuals.”

He views the arrival of vulture funds and the ability of Nama and other banks to sell off loans as an important part of the national recovery.

Black is not one of those annoying dynamos who gets up at five in the morning to jog and practise mindfulness before landing at their desk before seven. He laughs at the thought.

“No, unfortunately I don’t do any mindfulness,” he says. “I have a good friend who is a psychiatrist. On one cycling trip, he showed us how to eat a nut in a state of mindfulness, and that was an interesting experience. It took us about five minutes to eat an almond – but it was a lovely almond.”

When asked if law is a dry old business, his answer is an emphatic no. “In the practice of law, you see all sorts of life and that’s what makes it interesting. And you can actually achieve an awful lot and you can uphold a lot of values.”

In terms of hot legal trends, he points to privacy and data protection law. The firm is launching a consultancy business to help businesses implement the General Data Protection Regulation, which comes into effect next year.

He bats off attempts to wheedle out of him some of the more extreme antics displayed by clients or their opposite numbers over the years, pleading poor recall.

“You always see despicable behaviour, but the law gives you tools to combat that,” he says as a sop.

“I actually think law firms and the Bar in Ireland do an awful lot of good in terms of the upholding of standards. Your first job is to support the proper administration of justice.

“I think in Ireland, that is respected, and the country is better for it.”

This article was originally published in the Sunday Business Post on Sunday, 5 February 2017. The content of this article is provided for information purposes only and does not constitute legal or other advice.