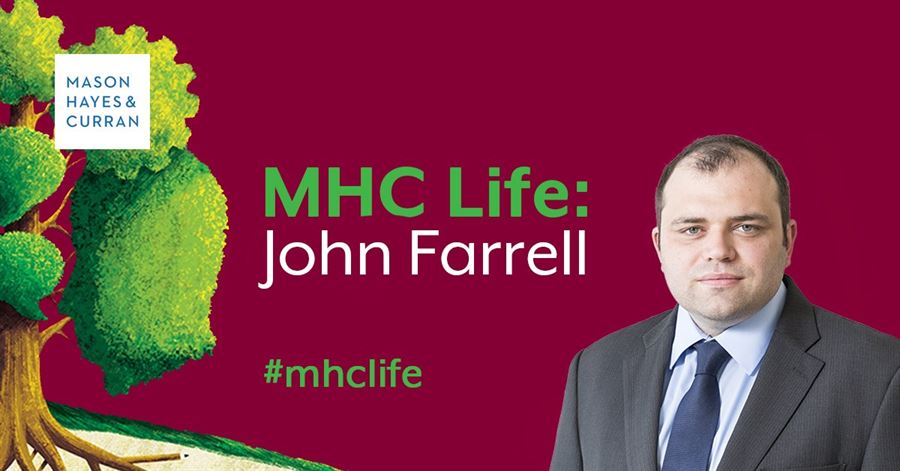 ​In the next interview from our MHC Life series, we chat to recently promoted Commercial Partner, John Farrell. John tells us about his career highlights and his idea of a perfect holiday.

What inspired you to venture on this career path/why did you choose law?

Law was always just something that I wanted to do as a career and I never really seriously considered any other options during school to be honest. Looking back, I think the romanticised version of lawyers in films and US TV shows definitely helped. 16 year old me had a fairly high opinion of himself, so the idea of those high stakes courtroom battles being won by some last minute piece of genius legal skill by the hotshot young lawyer was something that definitely had a strong influence!

There are two projects which really stand out over the years.

The first was acting for the IRFU on its, unfortunately unsuccessful, bid to bring the 2023 Rugby World Cup to Ireland. During the first meeting they showed us their "Ready for the World" promotional video (narrated by Liam Neeson) and it left all of us around the table speechless. I remember walking back to my office thinking that 30 years from now I'd probably be retired on some beach in the Maldives boring anyone who would listen to me with stories about how I helped bring the Rugby World Cup to Ireland.

The second highlight was definitely being part of the team that brought the World Meeting of Families event to Dublin, which of course included the Papal visit. Like the Rugby World Cup bid, it was one of those once in a career type of projects and getting to work with the passionate and dedicated people who were organising the event was a real inspiration.

Career advice I would give...

The second part is the biggest thing I try to do every day and it doesn't matter whether it's with colleagues, lawyers on the other side of a negotiation or the barista when you're getting your morning coffee. Being nice doesn't mean you work less hard for your client or have to like every single person you meet, it just means you treat people with respect. Your personal reputation and integrity is the thing people will remember about you, long after they've forgotten the names of the deals you worked on.

I love TV, films, sport and anything tech related and am a complete self-confessed nerd, as anyone who has ever had to sit through one of my presentations which are full of Marvel, Game of Thrones, Star Wars and Back to the Future references will know quite well! I regularly drive my wife Sandra to despair with the film/TV merchandise and general tech gadgets that I try to clutter the house with, so the happy medium we've reached is as long as I store it in my office/man-cave and she doesn't need to see it on a daily basis then it can stay. To be honest she's missing out, having a life sized House Stark Banner beside a lightsaber on your living room wall is the next big thing in interior design (probably…).

One thing most people don't know about you?

The Sunday Independent once referred to me (though thankfully not directly by name) as one of "Lady Gaga's Top Legal Eagles" because of an IP case I was working on at the time for her management company in my previous firm. I framed the article and still have it sitting on my office desk at home and love to wheel it out any time friends or family start making jokes about my life not being anywhere near as glamorous as the guys and girls on Suits. Sadly though, it seems my invite to her Oscar success party earlier this year must have gotten lost in the post…

I'm one of a small, but passionate, group of cruise aficionados in MHC and that's usually where you'll find me spending my summer holidays. My favourite destination so far was probably our trip to the Norwegian Fjords last summer which had such spectacular scenery that it was hard to believe it was actually real. My bucket list cruise is definitely the one on a Russian Ice Breaker ship that sails right up to the North Pole, perhaps unsurprisingly though, Sandra is a little less keen on that one!

Interested in joining the Law Firm of the Year? We are always interested in hearing from talented and experienced lawyers at all levels who are looking to relocate to Dublin.