What Does a No Deal Brexit Mean for Financial Services? 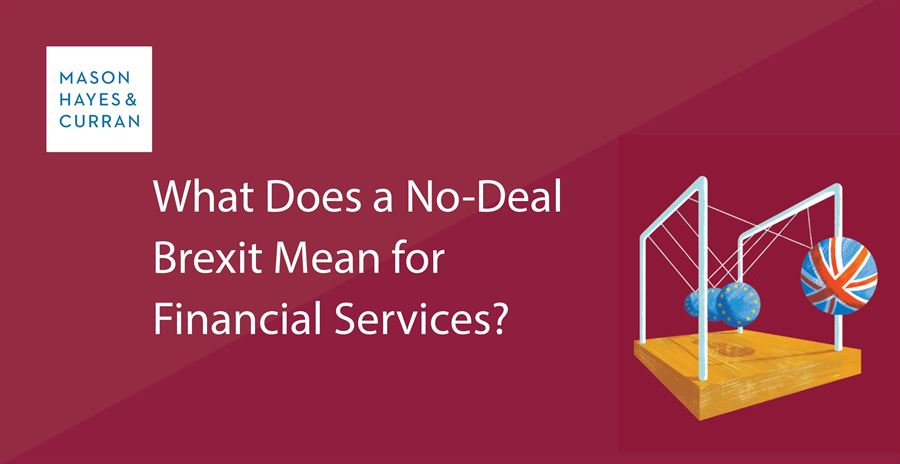 The UK has confirmed that it will not be seeking an extension to the transition period. This means that if the EU and UK do not agree a trade deal, the UK will begin trading with the EU on World Trade Organisation terms from 1 January 2021.

The controversy surrounding the UK’s proposed Internal Market Bill (the Bill) has added a further layer to the current trade deal uncertainty.  The Bill is intended to manage the free movement of goods and services in a post-Brexit UK. It proposes to grant UK government ministers powers to override parts of the Withdrawal Agreement.

The Bill is said to have been designed to ensure that trade between all four home nations in the UK remains barrier-free after the 31 December 2020. European Commission President, Ursula von der Leyen, has expressed her concern that the enactment of the Bill would breach international law. On 1 October 2020, the EU gave formal notice to the UK that the European Commission believes the UK is in breach of the Withdrawal Agreement.

The EU views the end of October as the final deadline to sign any trade agreement with the UK. If an agreement is reached during this time, both parties will have to ensure ratification of any deal in time for an entry into force by 1st January 2021. However, as things stand, there are significant gaps between the EU and the UK in the areas of state aid, fisheries, the level playing field and governance.

Given that the EU and the UK have not yet agreed on these significant areas, we are getting dangerously close to a “no-deal” Brexit.

The future relationship between the UK and EU remains uncertain. If arrangements are not in place by 1 January 2021 passporting rights for financial services firms out of, and into, the UK will end.

Currently, financial institutions authorised by a European competent authority under an EU single market directive can provide services on a cross border basis throughout the EEA on the basis of their home state licence without having to be separately licensed in the target jurisdiction where the clients are based - this is known as "passporting". This applies to banks, investment firms, insurance undertakings, fund managers, electronic money institutions, payment institutions and debt capital markers, amongst others.

After 31 December 2020, unless an alternative UK-EU trade deal is reached, regulated entities will lose their passporting rights to provide services either into the EU from the UK or into the UK from the EU. This will also have implications for firms servicing existing books of business.

Ireland is an obvious domicile for UK firms that are seeking to relocate within the EU and the benefits of an Irish authorisation for financial institutions seeking to continue to a passport into EEA countries are summarised below.

The implications of Brexit for EU firms passporting their services into the UK also needs to be considered. The UK Government has introduced a temporary permissions regime for certain EU firms, investment funds and their managers passporting their services into the UK (the “Temporary Permissions Regime”). This regime allows for certain EU firms to operate for a limited period of three years and thereby continue to provide services on a cross border basis into the UK while they seek authorisation from the relevant UK regulatory authority. Firms are required to notify the Financial Conduct Authority (“FCA”) if they wish to utilise the temporary permissions regime. Fund managers will also need to notify the FCA of the funds they wish to continue to market in the UK.

The possible loss of EU passporting rights may not signal the end for the provision of cross-border financial services from the UK. One option to consider is the so-called “third country” provisions provided for in certain directives, such as MiFID, AIFMD and the Solvency II Directive. These provisions permit third country firms, i.e. firms that are not located in the EEA, to provide some cross-border services in the EEA without requiring the third country firm to be licenced within the EU, provided the jurisdiction of the third country has laws that are deemed to be “equivalent” to those of the EEA. However, this is not an immediate fix and the availability of these rights will be subject to an “equivalence” determination by the EU Commission which has discretion to determine whether UK laws and regulations provide regulatory protections that are equivalent to EU laws and regulations. The process for evaluating equivalence is often a lengthy one and requires careful consideration.

In addition, equivalence is only provided for in certain directives. Key regimes such as banking (CRD) and payments (PSD2) do not provide for equivalence regimes and the equivalency regime provided for in Solvency II only extends to certain areas such as reinsurance and group supervision.

The end of June 2020 was targeted as the deadline for equivalence assessments between the UK and the EU; however, this deadline was not met. The failure so far to reach an equivalence assessment means that unless a trade deal is agreed, UK firms will not be able to continue to provide financial services without regulatory barriers or cost implications.

Over time, there is a risk that regulatory standards and frameworks will diverge between the UK and the EU.

By way of example, insurance firms in the UK are already seeking changes to the implementation of Solvency II when the transition period ends. The Prudential Regulation Authority, the supervisor of the UK insurance industry, previously acknowledged problems with the risk margin under Solvency II, but could not make any changes as this would require agreement at EU level.

In addition, the EU will also make amendments over the coming years to the frameworks for various financial services regimes that apply to EEA based firms, this will result in further divergence to the extent the UK does not adopt similar changes.

It is now time for regulated financial services providers to put their no deal Brexit contingency plans into action as the likelihood of any trade deal being reached before 31 December 2020 is diminishing.

If you would like to discuss any of these matters, please get in touch with a member of our Financial Services Regulation team.