The Trustee as Master or Minion: The Findings of the Pensions Authority Master Trust Engagement Programme 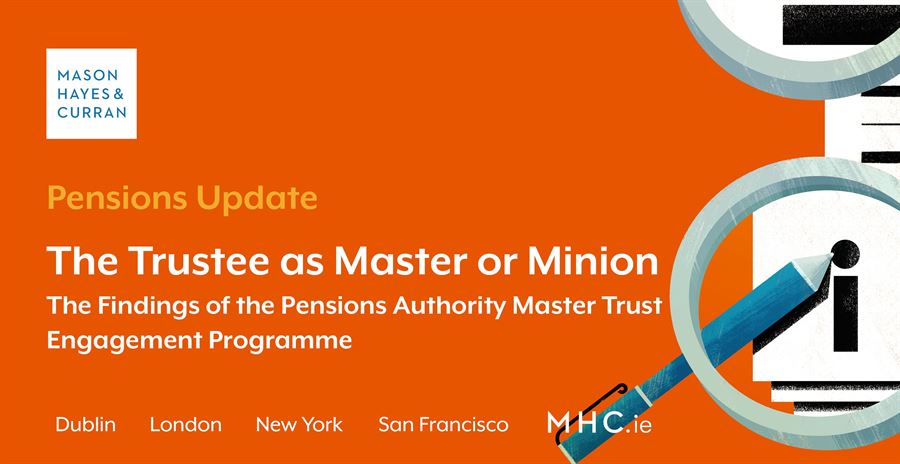 The Pensions Authority’s (the Authority) defined contribution (DC) master trust engagement programme (Programme) has come to an end and its findings report is essential reading for trustees and providers alike.

Aspects of the Programme

The Programme included the completion of a questionnaire by trustees, a meeting between trustees and the Pensions Authority and an individual findings report issued to each DC master trust on the basis of the questionnaire and the meeting. The reports contained feedback and key findings for each master trust.

In its findings report (Report), the Authority noted that it found issues with every master trust that completed the Programme. The Authority expects trustees to “address these matters if their master trust is to meet the standards expected after the transposition of the Directive”. The Report notes that as the master trust is likely to play a central part in Irish pensions provision in the future, it is essential that there is “no doubt about the minimum standards that the Authority expects”. The Report also refers to the need to ensure that the role of trustee and “founder” are separate. The founders refers to sponsoring organisations such as financial institutions or pension providers that have set-up the master trusts and while the Authority notes that each founder will have its own commercial objectives, these should not be confused with the obligations of  trustees to their members.

Some of the main issues identified in the Report

The Report notes that trustees appear to lack an appreciation of the “breadth of their responsibilities”. It states that many trustees believe that their role is centred around administrative and compliance based tasks and that the instructions of the sponsoring organisations must be followed. As well as that, it notes that many master trusts are unaware of the IORP II Directive (Directive) which is expected to be transposed into Irish law during the first half of 2021. The Directive will significantly increase the regulatory and compliance burden on pension schemes as well as creating new powers for the Authority.

The Report also found that many of the master trusts rules restricted the trustee’s ability to act in the interests of their members. It notes that “in some instances, the rules do not allow the trustees to replace the administrator, irrespective of how inadequate or expensive the administration services might be”. It also identifies an instance where the members’ funds were placed in the control of the sponsoring organisation and not the trustees. On this it notes that the investment of scheme assets is a fundamental objective of the trust and that the trustees should not be removed from involvement in one of their core responsibilities. On such findings the Report states that “the Authority considers it utterly inappropriate that trustees’ powers and responsibilities be constrained as described above”.

The Report confirms that the Authority also identified a number of existing and potential conflicts of interests in the master trusts. In some instances, conflicts of interest had not been considered at all and in other instances had not been considered in the context of trustee remuneration. The Report explains that such conflicts are likely to arise very often for master trusts and notes that they can only be dealt with by engagement with the issues. The Report suggests that “any failure in engaging with these serious matters is an indication that the trustees concerned do not understand the role they have undertaken”.

In most cases the Authority found that the board of directors of the trustee company consisted entirely of employees of the sponsoring organisation and that only a few had appointed an independent chairperson. The Report refers to the lack of autonomy held by these boards as “all major decisions required prior consultation or approval of the founder”. It is likely that this finding was made upon a review of the shareholding structure as well as the governing documents of each trustee company. In the Report, the Authority notes that this is unacceptable as it restricts the ability of the trustee to see to its fiduciary responsibilities to members. There is no doubt that a company acting as trustee of a master trust must have an independent board that is not subservient to the commercial objectives of the sponsoring organisation, if it is to meet its responsibilities.

The Report notes that “some master trusts are considering their current governance structures with a view to establishing a more independent trustee board and the Authority intends to monitor these developments closely in the coming year”. Any sponsoring organisation that has set up a DC master trust, or is in the process of doing so, should consider this requirement very carefully. Organisations must ensure that the governance structure of their master trust is acceptable to the Authority and that the trustee board in populated with directors that have the correct qualifications, independence, and meet the fitness and probity standards required by the Directive.

A lack of continuity plans

The obvious potential or actual conflict of interest was noted here. Throughout the Report the Authority is adamant that the trustee board must be autonomous and independent of the sponsoring organisation. The Report notes that the potential for conflicts of interest is greater in the case of master trusts. This is because  they are established by financial institutions or pension providers with commercial interests that are simply not aligned with those of the members. Trustees will need to assess how the service provider issue can be properly managed.

The Report confirms that in many cases, master trusts do not have an adequate set of investment objectives or performance targets. It noted again that trustees were not sufficiently involved in setting default strategies, fund choice or overseeing the risk and return objective of investments. The Report notes that “trustees will typically need professional help in this, but the overall task cannot and should not be delegated”. It also states that most master trusts had not given consideration to ESG factors, which again lends itself to the assumption that trustees of the master trusts are not sufficiently aware of the requirements of the Directive.

The Report concedes that, given the scale of master trusts, there will be communication challenges. However, the Authority expects this to be dealt with by way of written policies on communication with employers and members. Here the Report is definitive in what should be included in such a policy, it states that “the policy must set out in detail the format and frequency of engagement with members and employers. The policy must also contain a commitment to active engagement with members and employers”. While the Report noted that most master trusts provided some useful levels of member communication but had no communication policy in place.

For sponsoring organisations and trustees there is a lot to consider here. The tone of the Report very much confirms that the Authority is dissatisfied with its findings and that master trusts need consider the identified problems quickly. Though the master trust is relatively new in the Irish pension’s landscape, it is clear that it is experiencing significant growing pains and that trustee boards must take the lead in addressing each problem and obtaining the necessary assistance in ensuring that they are addressed in full. Master trusts must be masters of their own destiny and this will only be achieved by purposeful proactivity on the part of trustees.

We invite you to contact a member of the Pensions team should you require assistance or specifics in relation to any of the matters outlined above.