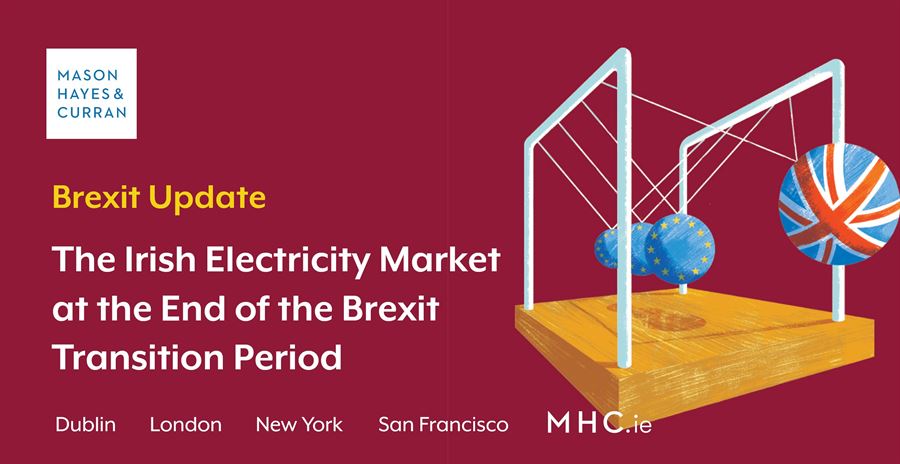 The Brexit transition period ended on 31 December 2020. As of 1 January 2021, the Protocol on Ireland/Northern Ireland (Protocol) protects the operation of the Single Electricity Market (SEM) in Northern Ireland. The framework for electricity trading across interconnectors between Ireland and Great Britain (GB) has also changed on foot of the EU-UK Trade Agreement and the end of the transition period.

The impact of Brexit on the SEM was addressed in the Protocol. As the Protocol now protects the continued operation of the SEM, it is worth recalling how it works.

The Protocol provides that the listed regulations and directives are deemed to include such legislation “as amended or replaced”. This will facilitate implementation of the relevant aspects of the Clean Energy Package in the SEM, as several of the instruments listed in Annex 4 have since been repealed and recast. If new legislation is adopted by the EU that neither amends nor replaces legislation listed in the Protocol but has a bearing on its operation, the new instrument will be considered for inclusion in the Protocol by the Joint Committee, which comprises representatives of the EU and the UK.

The Protocol will remain in place for an initial period of four years after the end of the transition period. The continued application of Articles 5 to 10 of the Protocol, which includes Article 9 on SEM, requires the consent of Northern Ireland thereafter. If approved in Northern Ireland at that stage, the articles will apply for a further four years, or eight years if there is cross-community support. If Northern Ireland rejects the continued application of articles of the Protocol, they will remain applicable for a further two-year transition period.

Trade across interconnectors between Ireland and GB

Ofgem has noted that, following the end of the transition period, GB cannot participate in EU single day-ahead coupling (SDAC) or EU single intraday coupling (SIDC) on GB interconnectors. This is because GB is no longer part of the EU internal energy market. In its Notice to Industry in the Event of a ‘No Deal’ Brexit, published in March 2019, the SEM Committee drew a distinction between day-ahead and intraday markets in the SEM. They noted that while day-ahead markets in SEM participate in SDAC on a pan-European basis and could be affected by Brexit, intraday markets between the SEM and GB are still traded at a regional rather than EU level and could continue unaffected.

There was general acknowledgement among stakeholders in advance of 1 January 2021 that the two interconnectors with GB, the East-West Interconnector (EWIC) and the Moyle Interconnector, would no longer be able to participate in SDAC following the UK’s exit from the internal energy market. This was noted in the Irish Government’s Brexit Readiness Plan and formed part of the “central” planning scenario of SEMO and SEMOpx in advance of the end of the transition period. We understand that the day-ahead market in the SEM has now decoupled from interconnection with GB and the wider EU market, and is local to the SEM. This differs from the approach taken by continental GB interconnectors, which switched from implicit to explicit day-ahead trading arrangements with continental European markets and introduced new access rules. Explicit trading involves trading of interconnector capacity and energy as separate steps, unlike implicit trading where the two steps are combined.

As for intraday trading, we understand that implicit trading across the EWIC and the Moyle Interconnector has continued in the two intraday timeframes that are coupled with GB (intraday 1 and 2). The SEM Committee confirmed in its statement on the operation of SEM at the end of the transition period that it had taken steps in intraday markets to address the potential loss of efficiency, namely:

Provisions on trade across interconnectors in the EU-UK Trade Agreement

While alternative enduring arrangements for trade across the interconnectors were not agreed in time for the end of the transition period, the EU-UK Trade Agreement contains a general commitment to develop “arrangements to deliver robust and efficient outcomes for all relevant timeframes, being forward, day-ahead, intraday and balancing”. This is outlined in Article ENER.13(f). The Specialised Committee on Energy will keep the arrangements for all timeframes under review. The committee may recommend that each party requests its transmission system operators to prepare technical procedures to improve arrangements for a particular timeframe. This is set out in Article ENER 14(3).

The agreement also contains a specific commitment to develop a procedure for the allocation of interconnector capacity in the day-ahead market timeframe “as a matter of priority”. The agreement states that allocation will be based on “multi-region loose volume coupling”, which is described in broad terms in Annex ENER­­­-4 to the agreement but requires further development. The model will involve an implicit allocation process and coupling with bidding zones that are directly connected to the UK by an interconnector. This procedure is to be implemented within 15 months following the entry into force of the agreement.

The issue of the continued operation of SEM was largely settled in advance of the end of the Brexit transition period. However, the arrangements for trading across the Ireland-GB interconnectors, both present and future, remain subject to review and further development, as required under the EU-UK Trade Agreement. The Q&A on the agreement published by the EU states that the multi-region loose volume coupling model is “different from and less efficient than” the market coupling used within the EU, but should still allow for maximisation of the mutual benefits of trade of electricity over interconnectors within the constraints of trading with a third country. Because the stated objectives of this process are superficially very similar to those which underpin the EU model, it is to be hoped that in terms of efficiency, the ultimate outcome will not fall too far short of the arrangements that applied before Brexit.

We expect to see further guidance on future arrangements for interconnection published by the relevant Irish authorities during the course of 2021.

If you wish to discuss the impact of the Level 5 restrictions may have on your project, contact a member of our Energy, Utilities & Projects team.