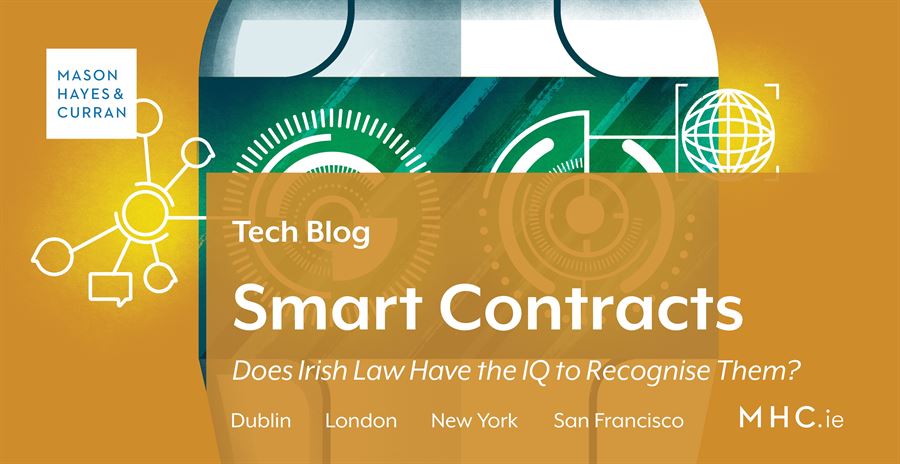 As technology develops, smart contracts are becoming technically feasible in areas such as IoT, share transfers, insurance and financial services transactions. But are “smart contracts” really contracts at all, and are they capable of being enforced like traditional word based contracts? This issue was recently considered by the UK Jurisdiction Taskforce (UKJT), resulting in the publication of a legal statement on the issue. We consider the findings of the UKJT from an Irish law perspective, and whether smart contracts could be recognised as valid contracts under Irish law.

Smart contracts are contracts which are written fully or partially in computer code. One of their distinguishing features is their ‘automaticity’ – the coded element of the contract can be performed without human intervention. We discussed some of the possible benefits and risks associated with smart contracts in our blog post last year, which can be accessed here.

By way of whistle-stop tour, Irish law requires four basic elements in order for a legally binding contract to be formed:

The UKJT found that, in principle, smart contracts are capable of satisfying these requirements. Whether these requirements have been met in a particular scenario depends on the parties’ words and conduct, as is the case with any other contract. The UKJT noted that, in a commercial context, there is a presumption that the parties intend to be legally bound by their actions, and that ‘very unusual circumstances’ would be required to displace this presumption. Consequently, the UKJT Statement finds that a smart contract may be interpreted and enforced using well-established legal principles.

It seems that Irish law on contract formation is also capable of applying to smart contracts, and the question as to whether a legally enforceable contract has been formed will depend on whether the contract in question meets these requirements. Smart contracts have the potential to be clear, transparent, and to irreversibly record the terms agreed in the offer and acceptance. There may be challenges of the code being understood by the courts, which is an evidential burden the parties should bear in mind when drawing up the code in their smart contract.

The UKJT Statement notes that the English and Welsh law approach to contract interpretation is that unless the contract wording is unclear, a court will generally conclude that it means what it says. It involves determining what a reasonable person, having the background knowledge that the parties would have had, would understand the language of the contract to mean. The wording of the contract itself is the clearest indicator of what the parties intended, other than in ‘very unusual cases’. Where the coded element of a smart contract is intended to implement the terms of the contract, but not to define them, the UKJT Statement suggests that the contract would be interpreted without reference to the computer code. The code would only be relevant to show if what was happening in practice correlates with what the parties agreed.

The UKJT Statement notes that it is where there is no natural language contract at all that the issue of contract interpretation differs most, and a court would need to refer to extrinsic evidence in order to determine the parties’ intentions. This appears to be similar to interpretation in the context of oral contracts, and so the normal rules of interpretation should apply.

The Irish courts demonstrate a greater willingness to look beyond the words of the contract, adopting a ‘text in context’ approach, stating that the nature of the document provides important context in terms of how it will be constructed by the courts. For smart contracts, an Irish court may be more willing to consider extrinsic evidence in order to interpret the contract. This is particularly likely to be the case where the contract is comprised of computer code which is used to define its terms, and where lawyers have had limited involvement in the negotiation of its terms.

This purposive approach by the Irish courts to contract interpretation also applies to the doctrine of mistake. This means that if there is an error in the coded-element of a smart contract, the Irish courts are likely to look beyond the literal meaning of computer code, in order to ascertain what the parties intended. This ability to consider the parties’ intentions, beyond what is set out in computer code, may reassure parties executing smart contracts, particularly given the potentially expensive ramifications if the contract is coded incorrectly.

While the UKJT Statement has no legal effect, it seems likely that its contents will be relied upon by both lawyers and judges in considering the validity of smart contracts, as the English Commercial Court recently did in finding that Bitcoin was capable of constituting property.

The UKJT noted that ‘perceived legal uncertainty’ was a barrier for adoption of this technology, which it hoped the UKJT Statement would dissipate. While it may be the case that the Irish laws on contract are capable of being applied to smart contracts, there are a couple of steps to go before there is sufficient certainty for businesses to start relying on them.

A hybrid model of paper and code seems to be the way smart contracts will develop at first, with a legal “wrapper” which references the code, and the automatic or deterministic terms being contained in the code. It would be good to see the Irish Law Reform Commission assess the current state of Irish law as it applies to smart contracts, and the changes needed to iron out the issues mentioned above. That should lead to legislation, creating a solid basis in Ireland for parties considering embracing smart contracts in their business activities.

*The UKJT Legal Statement on Cryptoassets and Smart Contracts can be accessed here.