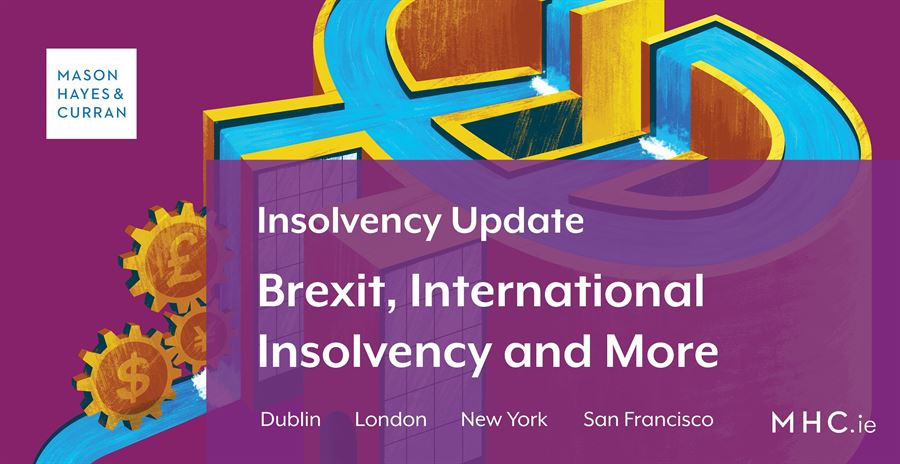 We consider one case illustrating the efficiency of international insolvency proceedings commenced in Ireland, improvements to the efficiency of the appellate courts and one imminent legislative change, which will impose an administrative burden on the holders of security over book debts.

Ireland as an efficient venue for international insolvency

Ballantyne plc, an Irish incorporated reinsurer faced claims of over $1.65 billion. A creditor led scheme of arrangement was approved by the Irish Courts,[1] which effected novation of its reinsurance obligations and full and final settlement with senior creditors. The scheme was recognised under Chapter 15 of the US Bankruptcy code as “foreign main proceedings”[2]. The entire process took approximately 6 weeks from the first court application in Ireland to conclusion, despite opposition by one of the smaller creditors.

Reducing delays in the appellate courts

There have been two key developments in 2019 which reduce delay in the appellate courts:

First, a significant number of old appeals have been managed out by proactive listing and subsequent striking out for non-compliance with directions. This has ended many proceedings which had been before the courts since early in the financial crisis.

Secondly, on 8 October 2019, the Irish Government appointed seven judges to the Court of Appeal, raising its complement by six judges..

Before the appointment of the additional judges, the waiting time for an appeal to the Court of Appeal was approximately two years. This led to hopeless appeals being filed in the hope that either the successful party would compromise the proceedings because of delay or simply to buy time. These appeals further clogged up the system creating a positive feedback loop.

The clearance of backlog and the appointment of the additional judges should decrease delay significantly over the next year.

Section 72 of the Finance Bill 2019 (S72), if enacted as drafted, will require the assignee of a fixed charge over book debts to notify the Revenue Commissioners either by 20 January 2020, or within 21 days of the date of assignment, or face increased potential liability for taxes payable by the chargor, on default.

Section 1001 of the Taxes Consolidation Act 1997 provides that the holder of a fixed charge over the book debts of a company may become liable for certain taxes due from the company on default.

However, the charge holder’s liability is limited, if Revenue was notified of the creation of the charge within 21 days of the date of its creation, to all sums received after Revenue send a notice of default to the charge holder.

However, if Revenue was not notified as above, the limit of liability is all sums received by the charge holder from the company.

The effect of the amendment

The amendment proposed will affect all assignments, except assignments to NAMA, including assignments on loan sales, cross border mergers and on schemes under the Central Bank Act 1971.

Given the amount of work that is likely to be needed, the holders of security from companies should now start to review their files to ascertain if they hold any affected charges.

The very rapid implementation of the scheme of arrangement in Ballantyne highlights the efficiency that the Irish courts can deliver.

Coupled with this, efforts to expedite the appeals process helps to bolster Ireland’s case to be a jurisdiction of choice post Brexit.

Looking forward, the President of the High Court is shortly to deliver a report proposing changes to the administration of civil justice, which we anticipate will further enhance the efficiency of the Irish courts system.

[3] Recognition of Irish insolvency proceedings is almost automatic within the EU by virtue of the Insolvency Regulation.

Legislative Update: Landlords and Banks May Not Become Guarantors for Rates

Brexit – Has Your Business Planned for Running Low on Oxygen?