Listed below are the top 7 most read articles over the last 12 months. Not surprisingly, our article on the much talked about Brexit referendum ranked first, while topics such as paternity leave and GDPR were also of particular interest to our readers.

The result in the recent Brexit referendum creates questions on how the UK’s decision to leave the EU will impact stakeholders across the key sectors of the UK economy.  We take a look at what Brexit means for technology, data protection and privacy.

The General Data Protection Regulation ("GDPR") will come into effect two years after it is published in the Official Journal of the EU. This means that Irish companies must be in full compliance with the GDPR by 2018. We look at six of the headline issues:

3. E-sign on the Dotted Line – The EU’s New Rules on Electronic Identification

On 1 July 2016, a new EU Regulation establishing electronic identification and trust services for electronic transactions (the “eIDAS Regulation”) kicks in. This will repeal Directive 1999/93/EC (the “E-signatures Directive”), which provided an EU framework for electronic signatures (“e-signatures”) and has been in force in Ireland via the Electronic Commerce Act in 2000 (the “2000 Act”). 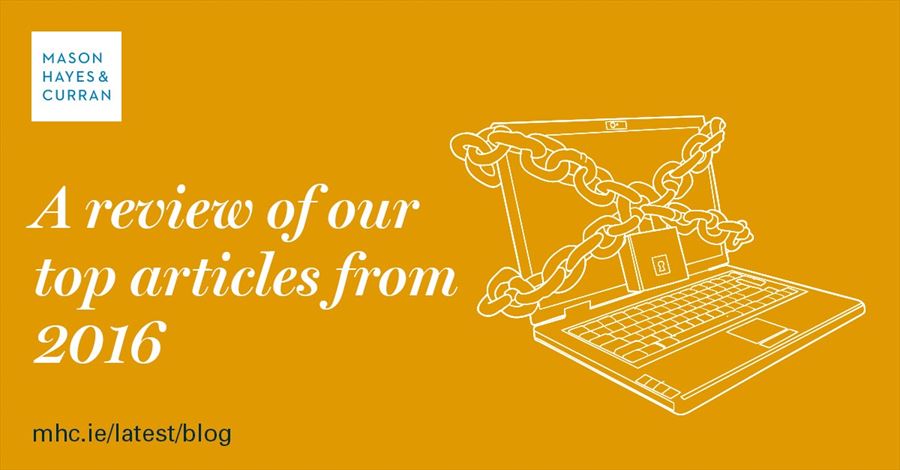 A recent decision by the Employment Appeals Tribunal ("EAT") found that the dismissal of an employee for putting “derogatory” comments on Facebook about a colleague was unfair. We look at the facts of the case and suggest some practical tips for employers to consider in similar instances.

Tuesday, 2 August 2016, heralded a significant development in the Irish legal landscape. With the signing of the Paternity Leave Bill into law, paternity leave is now recognised as a new legal right in Ireland. Paternity leave may be taken at any time from 1 September 2016 and must be taken within 26 weeks of the birth/placement of the child. We discuss the measures introduced by the legislation.

In December 2015, 3 years after the first draft was proposed, and almost 20 years since the Data Protection Directive was adopted, EU lawmakers came to agreement on the reform of data protection law. The new General Data Protection Regulation (the “GDPR”) was agreed upon and is currently in the process of formalisation and translation. It is expected to come into force in 2018. In this post – the first of our series looking at the GDPR – we introduce this new piece of legislation and look at some of the implications for businesses.

7. The ‘Internet of Things’: Legal Challenges in an Ultra-connected World

The ‘Internet of Things’ (IoT) is a real game changer that is set to transform our lives. Gartner predicts that by the end of this year over 6.4 billion web-enabled devices will be connected as part of the Internet of Things, an increase of 30% on 2015. And a staggering 5.5 million new 'things' will be added each day with the total predicted to rise to over 20 billion by 2020.

Click here to see all of our articles. If you haven't yet subscribed to our weekly updates, you can do so here.

Behind the Headlines: DPC v Facebook and its Potential Impact on International Trade