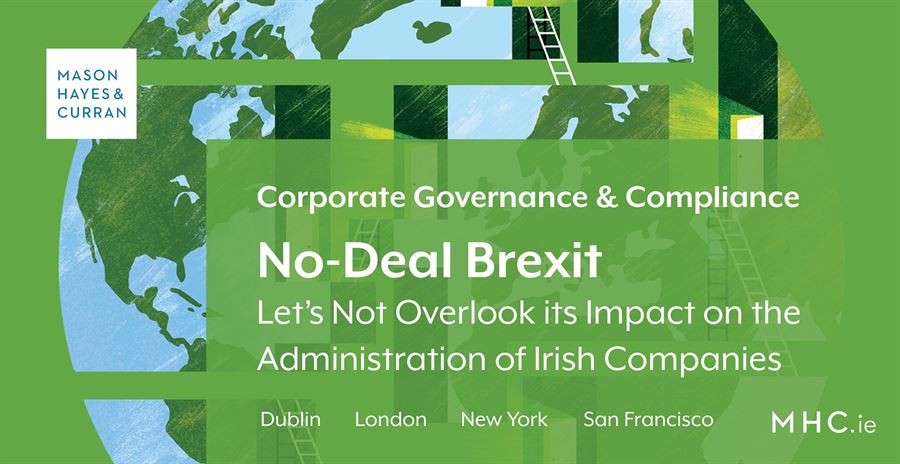 As the clock ticks ever closer to the possibility of a no-deal Brexit, the potential impact of this on the day to day running of Irish companies needs to be considered. That we would actually find ourselves in this economic limbo was predicted by few such that the need to focus on the micro rather than the macro never seemed like the best use of anyone’s time. Yet if certain of the micro, and one-time, seemingly procedural, elements related to the administration of Irish companies are not addressed by legislation, and the Irish companies affected themselves take no action, those companies and their directors could find themselves in a place where they are committing an offence under the Companies Act 2014 (2014 Act).

Every company incorporated in Ireland must have one director who is resident in a member state of the European Economic Area (EEA). There are many Irish companies that fulfil this requirement by having a director who is resident in the United Kingdom (UK). Where the UK does not remain a member of the EEA, Irish companies so fulfilling this requirement must take action regarding the composition of their boards or risk the company itself and its officers committing an offence under the 2014 Act. In addition, and from an administrative perspective, the Companies Registration Office (CRO) will not accept filings from a company that lets this breach subsist.

The action that can be taken by companies in this position is threefold; they can appoint a new director that is resident in an EEA state, they can purchase a two year bond to the value of €25,000 to cover the payment by the company of penalties imposed on it arising out of offences committed by it under the 2014 Act and certain tax legislation or they can apply to the CRO for a certificate confirming that the company has a real and continuous link with one or more economic activities that are being carried on in the State.

There are practical considerations for the latter two of these options. A bond cannot commence prior to there being a need for it to be in place (ie, there must be no EEA resident director at the time that it becomes effective) and the CRO will only issue a certificate of a real and continuous link in reliance on written confirmation from the Revenue Commissioners that it is of the opinion that such a link exists. To effect these options, therefore, can take time which, presently, appears to be running out.

If the UK does not remain in the EU, Irish companies that presently use firms in the UK to provide audit services may have to appoint new audit firms. This will present businesses with unnecessary expense, particularly those companies with financial year ends falling early in the calendar year who may have to deal with a handover to new auditors occurring mid-audit.

It is a well acknowledged fact that a no-deal Brexit will present much economic uncertainty for Irish companies. The closer that we get to a no-deal situation becoming a reality, the more pressure that will come on companies and their directors to interrupt operations to deal with urgent, but somewhat procedural matters, the breach of which could have them commit an offence under the 2014 Act. While clearly stating the obvious, the sooner that there is certainty, the sooner that “business as usual” can resume.

If you have any queries or require assistance in this area, please contact a member of our Corporate Governance & Compliance team.