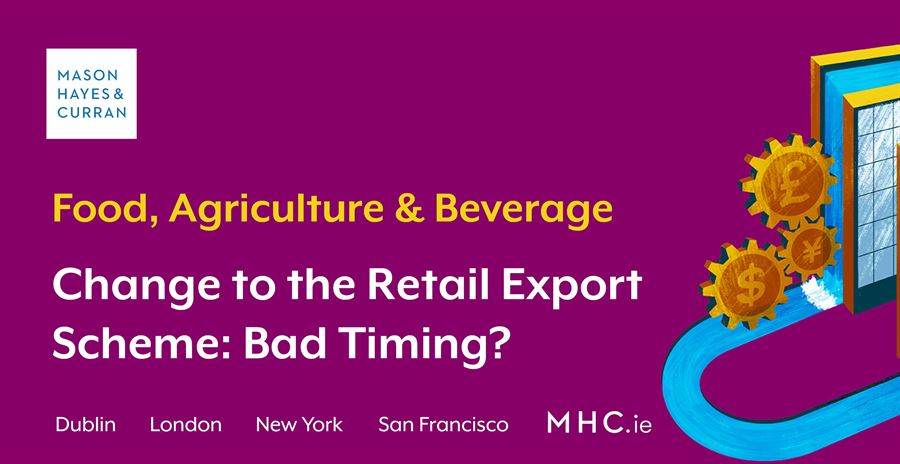 After a tough year of closures and trading restrictions as a result of COVID-19, Irish retailers must prepare for further challenges arising from Brexit. Unless a further transitional extension is sought, Brexit will take effect on 1 January 2021. The Irish Government have a lot to do to make the country “Brexit-ready”. One of the proposed changes will have a direct impact on retail in the context of non-EU tourists. New legislation is being introduced to amend the current Retail Export Scheme, namely the Withdrawal of the United Kingdom from the European Union (Consequential Provisions) Bill 2020 (the Brexit Omnibus Bill 2020). This proposes a significant change to the scheme, which will impact retailers who rely heavily on the tourism industry for revenue.

Under the Retail Export Scheme, a tourist who is resident outside of the European Union is entitled to claim a refund on the Value-Added-Tax (VAT) on certain goods purchased within the EU. The Brexit Omnibus Bill 2020, as published, is set to increase the minimum spend threshold from zero to €175 in respect of purchases made by non-EU tourists in Ireland. For example, a non-EU purchaser would have to spend in excess of €175 on a purchase before it could reclaim the VAT paid. This would result in Ireland having the highest spend threshold in Europe. However, following extensive lobbying by retailers and interest groups, the Cabinet has in the last few days agreed to amend the Bill to reduce the threshold to €75.

The rationale behind this change is to prevent a situation where, following the UK’s withdrawal from the EU, UK visitors to Ireland would be able to buy goods VAT free. When challenged over the proposed provision, Minister for Finance, Paschal Donohoe stated that if British tourists could buy Irish goods VAT free there would be “considerable displacement of consumer purchases” which would result in significant VAT revenue loss for Ireland.

However, the retail and tax-refund industry have argued that the proposed legislative change is not reflective of the reality of the situation and that such an increase would serve to jeopardise the scheme in its entirety. Data from Fáilte Ireland shows that the average British tourist to Ireland spends approximately €30 per trip on retail meaning that any VAT refund would likely have little effect on British tourists. This would however impact tourists from countries like the United States, China and Canada, who are a key source of revenue for Irish retailers.

The Government stated that the proposed reduction would retain protections for the Exchequer while at the same time support retailers, especially those engaged in the tourism sector. The qualifying threshold will be changed by way of a Committee Stage amendment to the Brexit Omnibus Bill 2020. Currently, the Bill must go through three more stages before it can be enacted and signed into law by the President.

Retailers are calling on the Government to outline how they arrived at the €75 figure stating that the lower threshold does not go far enough. The majority of independent retailers, especially along Ireland’s popular tourist route the Wild Atlantic Way, sell items that will fall below the €75 threshold. Many other tourist destinations around the country will likely fall within the same category. The proposed change to the Retail Export Scheme will impact these businesses.

The counter argument is that the proposed change is necessary to stop any abuse of the current VAT refund system given the volume of traffic from the UK to Ireland. However, the amended threshold will result in Ireland having a high minimum spend when compared with other European countries – possibly damaging our competitiveness as a tourist destination.

Any increase in the refund threshold will also negatively impact on the tax-refund industry in Ireland. Businesses like Fexco and Planet have been critical of the Government’s lack of consultation with the businesses and interest groups in this space and warned that the new VAT refund threshold has the potential to eliminate the industry.

The proposed change to the VAT refund scheme comes at a time when the Irish retail industry is battling the twin threat of COVID-19 and Brexit. Since its introduction, the scheme has been of crucial importance to regional economic activity and the viability of Irish retailers, who are largely dependent on tourism.

The Government’s announcement to reduce the threshold from €175 to €75 is welcome but there are concerns that this is still too high and will ultimately damage Ireland’s competitiveness. The Bill is not yet law and the Irish Government could still take a “wait and see” approach. Following the first 6 months of Brexit, if there is no significant foul play or major increase in VAT refunds by non-EU tourists (particularly from the UK), then it may prove that a change to the scheme is not needed. In the alternative, it may be difficult and time consuming to row back on the proposed legislative change once it is commenced.

The change to the existing scheme may also have negative implications yet unforeseen by the Irish Government – like the impact on US & Chinese tourists and their decision making on what EU country to visit.

The UK has yet to state whether it will apply a full Retail Export Scheme post-Brexit. In the event that it does then Ireland will probably align with its position. While Irish retailers will be hoping that pressure on Government results in the spend threshold not being commenced in 2021, the sector should be prepared for such a scenario.

For more information contact a member of our Food, Agriculture & Beverage team.