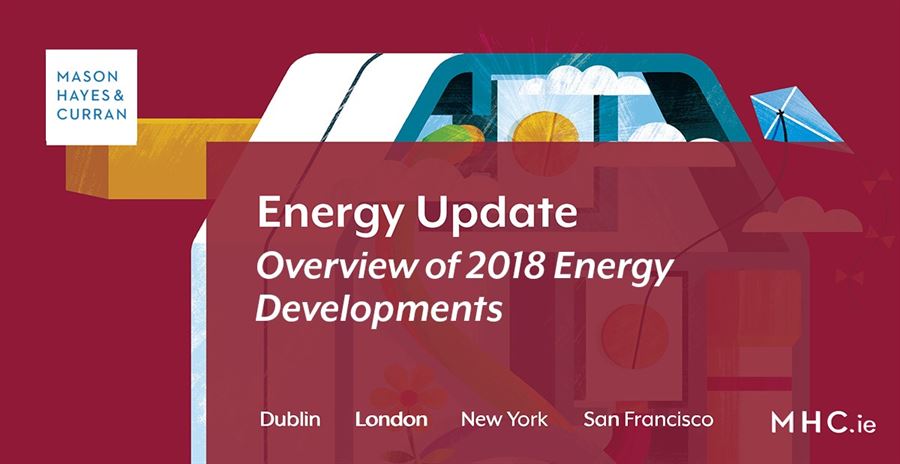 Even the relatively casual observer of the Irish energy sector will be familiar with the Irish government’s “40% by 2020” renewables target for electricity consumption.  While a creditable 3.5GW of renewable generation capacity has been installed in Ireland to date (on average 140MW a year since 1993), mainly as onshore wind farms, it is estimated that a further 800MW of onshore wind will need to be installed in order to meet this target. This will require that record rates (400MW a year) of annual wind farm construction will be required from now until the end of 2020 in order for the State to avoid the imposition of financial penalties for failing to meet the binding EU renewable energy (RES-E) targets.

The imminent expiry of Ireland’s REFIT feed-in tariff schemes complicates the installation of this 800MW. Any REFIT-supported project that has not yet started construction will be under pressure to persuade potential funders that it is capable of meeting the scheme’s construction and connection deadlines of 31 December 2019 and 31 March 2020 respectively.

In July 2018, the Irish Government announced its intention to establish a successor scheme, the Renewable Electricity Support Scheme (RESS), and published the high-level design of this scheme.  According to this design, RESS will operate by allocating long-term Contracts for Difference, or CfDs, to projects that are successful in auctions.

In order to participate in RESS auctions, bidders will need to satisfy community participation requirements and will need to have secured adequate planning permission and grid connection for the proposed project.

The high level design contemplates that the first RESS auction (RESS-1) will occur in 2019 for 1GWh of electricity, and will include an “interventionist lever” under which only “shovel ready” renewable projects with short construction programmes will be able to participate with a requirement that connection to the grid and energisation is achieved by 31 December 2020.

The high level design also anticipates that a series of subsequent auctions will be held annually out to 2025 for project delivery by the end of 2030.

These developments are all extremely positive and set what is potentially a great platform for the development of renewable energy projects in Ireland over the next decade.

However, in addition to the more detailed auction structure and conditions that are required to enable developers to proceed with certainty, the implementation of RESS remains subject to State Aid approval. The formal timeline for this approval process has not yet commenced, and a risk therefore exists that the RESS-1 auction will not be held until late 2019 or early 2020 at the earliest.

This means the proposed “connection by 2020” lever is unlikely to remain appropriate (without some kind of grace period protecting projects against a “cliff edge” withdrawal of support in the event of late delivery), and that any RESS-1 contribution to Ireland’s RES-E target is likely to be very limited.

If REFIT will not be sufficient to meet the target, based on the current REFIT timelines, then it would make sense for some flexibility to be afforded to renewable projects which are capable of connecting before 2020 but which cannot achieve the hard deadlines currently imposed under REFIT. From our analysis, the Irish government has sufficient flexibility to do this within the terms of the REFIT rules and the State Aid approval that was originally obtained for the REFIT scheme.

Separately, a major four-year project culminated on 30 September 2018, with the go-live of the new “I-SEM” trading arrangements in the Single Electricity Market, or SEM. The SEM is the wholesale market through which most of the electricity generated and consumed on the island of Ireland is priced and traded.

The most significant local impact of I-SEM has been to expose Irish electricity generators – and particularly renewable generators – to financial costs associated with errors in the forecasting of future production. This exposure has fostered a new and thriving niche in the Irish electricity sector, as both local and international energy trading houses offer risk mitigation services to local generators.

The I-SEM project has been motivated by the EU network code on capacity allocation and congestion management – one of the many codes that forms part of the EU energy regulatory structure – and will facilitate cross-border electricity trading between the island of Ireland and its neighbours. When the project was conceived, it is unlikely that the planners anticipated that one of these borders would shortly become part of the EU frontier.

The SEM is based on an inter-governmental treaty between Ireland and the United Kingdom, outside of the European Union treaty structure.

Currently, there is no clear legal basis upon which Brexit could cause the immediate suspension of the SEM. Over the longer term, however, distortions in pricing within the market may arise if, post-Brexit, Northern Ireland adopts policy positions that are incompatible with EU law.

A climate of action

Renewable electricity generation is not the only growth area in the Irish energy sector. The Irish government recently announced a series of investments, by its Climate Action Fund, in other energy initiatives that are aligned with the wider decarbonisation agenda.

These projects include developments in “renewable gas”, or gas produced from the anaerobic digestion of agricultural and commercial waste, electric vehicle charging infrastructure, district heating and fuel efficiency.

Ireland’s onshore wind farm industry remains vibrant, after a sustained period of growth underpinned by stable government support schemes. However, the end of 2018 sees the sector entering a period of transition as one scheme makes way for its successor.

It is to be hoped that internal and external pressure, for Ireland to remain broadly in step with the international decarbonisation agenda, will prompt the Irish Government to renew its efforts in this area during the coming year and beyond.  A well established and increasingly efficient local industry stands ready to play its part.

For more information on issues potentially affecting your business in 2019, contact a member of our Energy team.