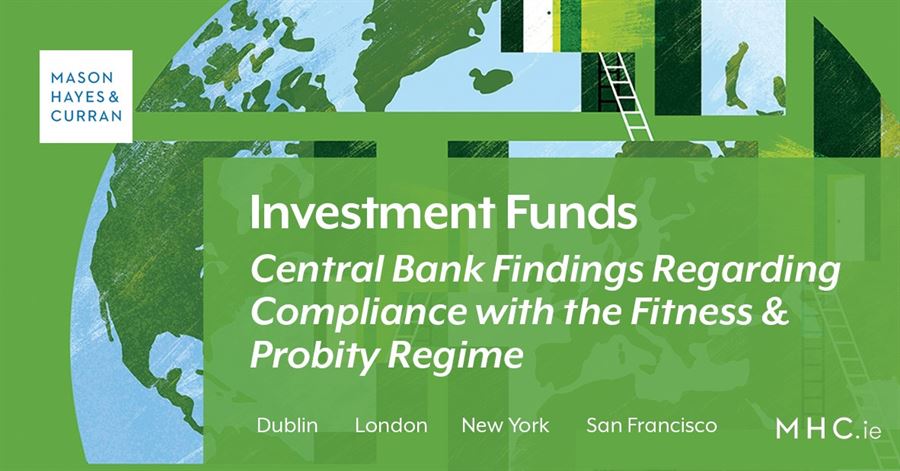 The Central Bank of Ireland issued a “Dear CEO” letter to all regulated financial service providers (RFSPs) on 8 April 2019. In its letter, the Central Bank highlights key concerns in relation to:

The letter applies to all RFSPs, which includes collective investment schemes, fund management companies and their service providers.

The Central Bank’s letter reminds RFSPs of their ongoing obligation under section 21 of the Central Bank Reform Act 2010 not to permit a person to perform a CF unless the RFSP is “satisfied on reasonable grounds” that the person complies with the Fitness and Probity Standards. Despite recent enforcement action, the Central Bank noted significant shortcomings in compliance by some RFSPs with fitness and probity obligations, particularly relating to failures not to assess on an ongoing basis whether persons carrying out CF roles remain fit and proper.

RFSPs are reminded that they are required to conduct due diligence on an ongoing basis to ensure that persons carrying out CFs comply with the Standards. As part of this requirement, the Central Bank recommends that RFSPs should:

Reporting issues to the Central Bank

Requirement for the prior approval of PCF holders

Due diligence regarding PCF holders

Where PCF holders are proposed, the PCF applicant is required to complete an individual questionnaire (IQ), which the Central Bank will review before approval is granted or possibly refused. The Central Bank has identified cases where applicants failed to disclose material facts that were either known to the proposing RFSP or would have been known if proper due diligence had been conducted. IQs must be signed off by both the applicant and a proposer on behalf of the RFSP, and care should be taken to ensure that the IQ is complete and accurate. In its letter, the Central Bank advises RFSPs in relation to the completion of IQs, explaining that it is for the Central Bank, and not the applicant, to decide whether a fact is material. The Central Bank notes that it will challenge applicants if they fail to make full and candid disclosure.

In its letter, the Central Bank refers to settlement agreements regarding the enforcement action it has taken against certain RFSPs regarding compliance with the Standards. As detailed in the settlement agreements, the Central Bank expects RFSPs to implement appropriate systems, controls and processes to ensure compliance with the Standards.

The Central Bank advises CEOs of RFSPs that it expects them:

If you require assistance in relation to compliance with the Fitness and Probity Regime, please contact a member of our Investment Funds team.