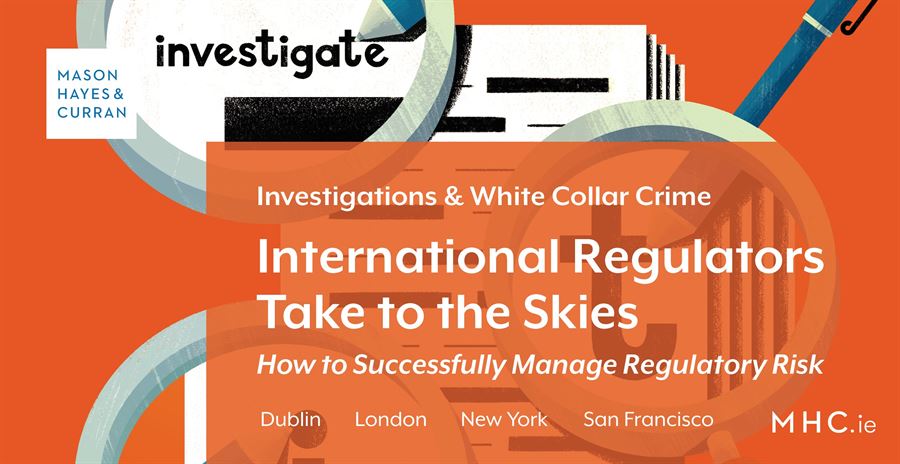 Aviation industry giants have incurred the wrath of regulators of late, €3.6 billion in Airbus’s case, just this week. They have suffered significant reputational damage causing share prices to plummet. The aircraft leasing sector has traditionally primarily focused on credit risk, but given recent regulatory decisions, compliance regimes must now change. We investigate what these events mean for your company.

Rolls Royce was the first aviation industry player to be investigated by the UK’s Serious Fraud Office (SFO). Once the epitome of British industrial prowess, overnight it saw its reputation shattered by allegations of bribery and corruption. What followed was an investigation spanning four years, across several jurisdictions, involving more than 400 airlines and leasing customers. In early 2017, the SFO announced that its investigation culminated in a Deferred Prosecution Agreement (DPA), resulting in a fine of over £500 million. The losses didn’t stop there. Rolls Royce incurred an additional £167 million fine payable to the US Department of Justice and Brazilian law enforcement authorities. Just a year later, the company culled close to 10% of its workforce, resulting in the loss of over 4,000 jobs.

Recently, Airbus was fined a record-breaking €3.6 billion to settle a global enquiry into allegations of endemic corruption. The investigation, which lasted almost four years, indicates a growing trend towards international regulatory cooperation. It was led by a trifecta of regulators in the UK, US and France, with France taking the lead. The UK’s SFO marked its seventh DPA by imposing its largest ever fine of €991 million. The French have voraciously embraced DPAs in their fight against corporate crime since their adoption just two years ago. This was the French prosecutors’ ninth DPA which will see Airbus fined €2.08 billion, in addition to a three year monitorship, the costs of which will be borne by Airbus. Finally, the company agreed a settlement of $582 million with US authorities.

The investigation has already claimed the roles of a number of senior executives, “even though they were not implicated in any wrongdoing”. Airbus was also required to undertake substantial remediation work, overhauling “its ethics and compliance procedures, established an independent review panel of outside experts” and restructuring its sales teams. These measures were key to obtaining the DPA, which are not always forthcoming. In fact, the French reduced the fine by 50%, commending Airbus on its “exemplary cooperation”. The Board considered that its chances of settling the matter were higher if there was “an entirely new senior management team in place”.

The devastation of regulatory action is clear. Even if an investigation finds limited wrongdoing, a company can suffer serious reputational harm, job losses and a drop in its market value. When individual or organisational culpability arises, then ever increasing international fines will inevitably ensue. Moreover, regulatory encroachment will likely soon take the form of commercial restructuring as happened at Airbus, but also the presence (and expense) of a monitor, as was indicated in the SFO’s most recent guidelines on compliance.

While the aircraft leasing sector in Ireland is subject to limited oversight by the Central Bank, this will soon change. The Irish Corruption Act 2018 (Act) broadly adopts the principles of the UK’s Bribery Act. However, it imposes an even higher threshold for compliance. The Act imposes a strict liability offence on corporate corruption and requires that a company will be afforded a defence, only in circumstances where it can “prove that it took all reasonable steps and exercised all due diligence”. This two prong test represents a significantly higher threshold than is required under the UK’s legislation. This means that it will be easier to prosecute bribery and corruption in Ireland, exposing companies operating here to heightened risk.

The aircraft leasing community must recognise the need for change as a result of these latest events. Companies must recognise the unique requirements imposed by the Act and the risks that are faced. Operating in risky jurisdictions with potential political exposure means that it is essential that the new regulatory obligations are taken seriously. If companies fail to do so, they may be exposed to unnecessary damage.

In practical terms, this means that you must update your compliance programme, particularly, if you have not done so in the past year. But the Act doesn’t just deal with compliance. Your commercial activities also fall within the scope of the Act. Your sales processes, commercial documents governing contractual negotiations, risk assessment and oversight are now subject to the Act’s requirements. One of the key issues is that you must actively assess and monitor your counterparties’ potential exposure to bribery and corruption. If you fail to do so, and corrupt activities take place, you may be the subject of the new CEA’s first aviation industry investigation.

If you would like to discuss achieving full compliance with the Act and the new regulatory obligations, contact a member of our Investigations & White Collar Crime or Aviation & International Asset Finance teams.