The EU Commission has cleared the way for Ireland to introduce a tax on sugar sweetened drinks. In October 2017 the government announced a proposal for a Sugar-Sweetened Drinks Tax (SSDT) to come into effect on 1 May 2018. The EU Commission has now concluded that the SSDT does not involve State aid, as it is consistent with the health objectives being pursued by Ireland (of tackling obesity) and will apply in a non-discriminatory manner.

Who does it affect?

Soft drink manufacturers will be taxed according to the volume of sugar-sweetened beverages they produce or import. A Sugar Sweetened Drinks Supplier (SSDS) is accountable under the VAT Acts and must pay the tax to the Revenue. Examples of companies that may be liable are wholesalers, distributors, retailers, producers, importers and companies making self-supplies, for example to employees. There’s no indication yet if companies will pass on the increase to consumers or bear the brunt of the tax itself so that its price point does not change.

What does it affect?

How much is it? 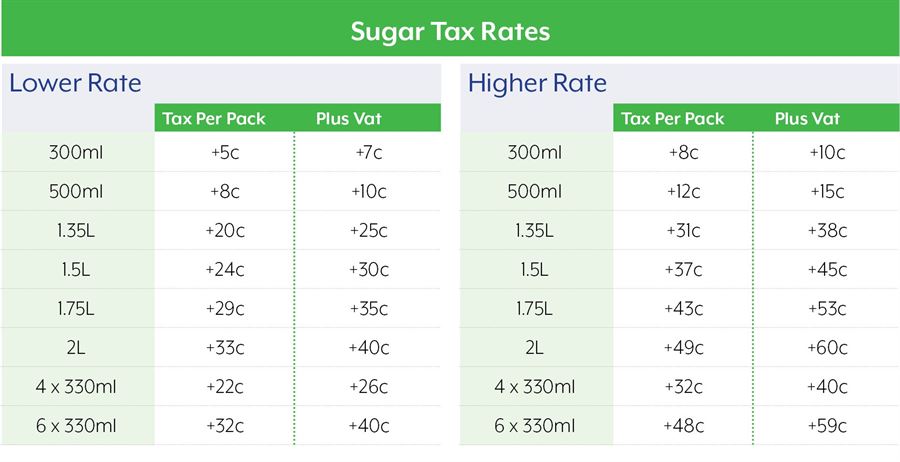 When does the liability arise?

In Ireland, liability arises when a supplier makes a supply of a quantity of sugar sweetened drinks for the first time i.e. the goods have either been brought into or procured in the State and are being supplied to another person by the importer or producer. In making the first supply, the importer or producer is deemed to be a SSDS (Sugar Sweetened Drink Supplier). Second and subsequent supplies in the State are not liable supplies as they are not making the first supply. First supplies that are free of charge are still liable to SSDT.

How is it applied?

SSDT will be collected by the Revenue Commissioners on a self-assessed basis. SSDS must assess their tax liability and file a return and payment on that basis. Rates payable are established from the information provided on the product’s label. All SSDS will be required to file a return with the Revenue and pay any liability no later than one month after the end of an accounting period.

Are there exclusions to the tax?

Specific products excluded are alcohol free beers and wines, drinks that are based on soya, cereals, nuts or seeds or contain milk fats and products labelled as food supplements and any product excluded from EU food labelling obligations on the basis of their small scale production.

Is anyone exempt or do reliefs apply?

Exporters of sugar sweetened drinks supplied commercially outside the State, are exempt, as are first supplies between related companies.

Relief may apply where goods, for which the supplier has already filed and paid SSDT are returned to the supplier.

What does it aim to achieve?

It is hoped it will result in reduced consumption by incentivising people to opt for healthier drinks while also providing motivation for the soft drinks industry to reformulate their products to reduce the added sugar content. The EU Commission agreed that the scope and design of the tax are consistent with the health objectives being pursued by Ireland, namely tackling obesity and other sugar-related diseases.

What to expect for the future?

Minister Paschal Donohoe said the funds raised would go back to the Exchequer and wouldn’t go specifically to tackling obesity. The Department of Finance says the tax will yield in the region of €30 million this year and €40 million in a full year. Professor Donal O’ Shea, Ireland’s leading obesity expert said it was “a hugely important step towards reducing obesity”. He said estimates are “that this measure could reduce obesity rates within five years by thousands of cases per year.”

Affected manufacturers should carefully consider the likely impact the Sugar Tax will have on their businesses. To find out more, contact a member of our Food, Beverage & Agriculture team.