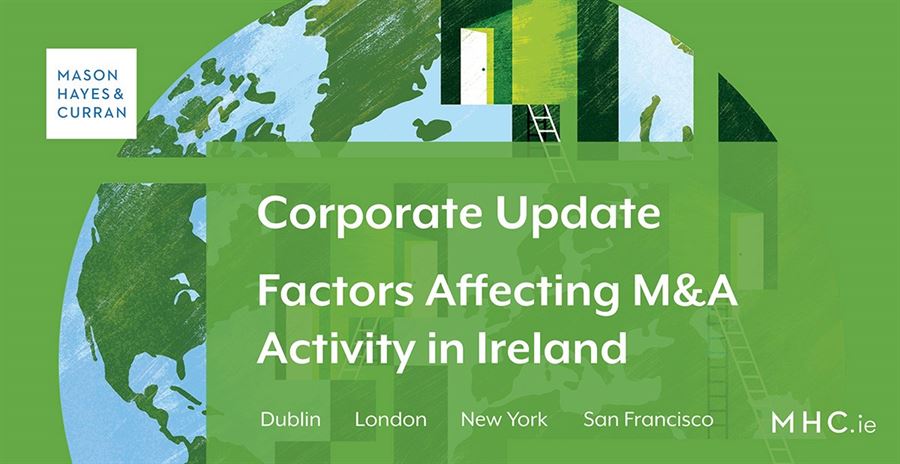 Despite the well forecasted uncertainty around Brexit and Trumpenomics, 2018 was a strong year for corporate activity in Ireland. M&A transactions were significantly up on 2017 based on data from deal tracking websites and merger notifications. Foreign direct investment (FDI) also increased with IDA Ireland, the State body responsible for attracting FDI, reporting record results for 2018. In this new era of continued uncertainty, the prospects for corporate activity in Ireland remain strong for 2019.

All about the numbers

The Irish economy performed well in 2018 and was the fastest growing economy in the Eurozone. GDP is forecasted to have grown by 4.7% during 2018 with continued growth of 4% expected in 2019. The unemployment rate fell to 5.7% in 2018 and is expected to be at 5.1% in 2019. The strength of the Irish economy resulted in the Government finishing 2018 with its first budget surplus in 10 years, a €106m surplus after a record €55.58bn tax haul. Ireland now has an ‘A’ grade from all of the major credit rating agencies.

It is expected that continued economic growth will be achieved by Ireland’s steadfast focus on being a stable, competitive and pro-business country with a talented workforce. Ireland has the youngest population in Europe with one third of the population under 25 years of age as well as one of the most educated workforces in the world. The share of 30-34 year olds in Ireland with a third level qualification is 53.5%, compared to an EU average of 40%.

Despite developments elsewhere, Ireland remains a committed member of the EU Single Market and the Eurozone, with strong public support for Ireland’s EU membership. As an island nation with an open economy, Ireland understands that strong global trade is of significant benefit. Ireland is also well aware that any significant decline in global trade or changes in EU tax harmonisation will have an impact on the Irish economy.

Looking forward for the rest of 2019, we expect to see M&A activity in Ireland at a level similar to that in 2018.

Domestically, the Irish private equity funds are well funded and are expected to retain a key focus on acquiring stakes in indigenous founder and family owned business which can grow organically and by acquisition. The need for scale and succession planning should drive increased consolidation within the Irish market, supported by the continued strong availability of bank and non-bank debt funding.  We have already seen signs of such consolidation in the food and services sectors.

Internationally, we expect to see continued acquisitions of Irish companies by foreign multinationals, particularly within the technology and medtech/life science sectors.  Historically, this activity has been primarily driven by US companies. However, in recent years, we have seen increased activity by companies from other countries, particularly Canada, France and China. We would also expect to see increased M&A activity by UK companies seeking to de-risk the consequences of Brexit by making strategic acquisitions in Ireland.

Despite increased uncertainty in the world, Ireland has remained, and will continue to remain, focused on developing a stable economy which is attractive to international businesses; putting our best foot forward as the path ahead twists and turns.

While organisations contemplating a merger or acquisition during the coming year should closely monitor geo-political and economic issues, expert legal advice should also be obtained on the likely impact these issues will have on their business and any future structure resulting from that transaction. If you would like further information please contact Martin Kelleher or any member of our Corporate team.

Implications of Brexit - Challenge and Opportunity in 2019