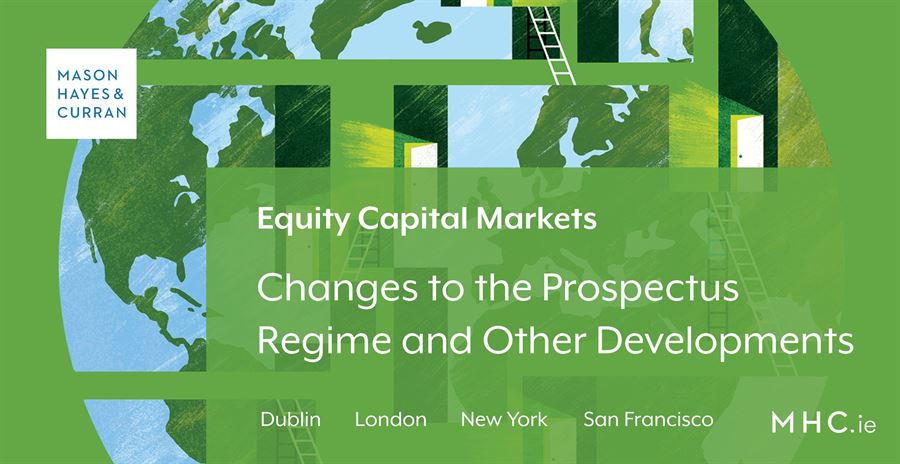 In this review of 2019 we highlight some of the main items impacting on equity capital markets. These include:

Changes to the laws relating to Prospectuses

In 2019 major changes took effect in the regulatory Prospectus framework, which is a multi-layered regime. Overall, the changes have two main purposes:

We highlight the main legislation, delegated acts, technical standards and rules which have come into effect in 2019 in this multi-layered regime.

Delegated acts applicable to prospectuses are:

See here for a link to the ESMA library which contains all the ESMA documents, guidelines and reports relating to prospectuses.

Finally, the Finance (Tax Appeals and Prospectus Regulation) Bill 2019 has recently been published which will amend the prospectus law provisions in Part 23 of the Companies Act 2014. The Bill was passed by the Houses of the Oireachtas and it should be enacted soon. The prospectus related amendments are mainly technical in nature. The Bill proposes to update the definition of ‘local' offer to reflect the increase in threshold to €8 million. This is a welcome change for SMEs. Once this change takes effect, SMEs making security offerings up to €8 million can submit a local offering filing to the Companies Registration Office instead of having to issue a full prospectus. Due to the increased threshold, additional disclosure requirements are to be inserted into the local offer regime to improve investor protections compared to those currently in place under the Companies Act 2014.

The ISS changes include:

Companies should review and consider the applicability of the new proxy guidelines in light of their individual situations.

As Euroclear UK, which operates the CREST settlement system, will cease to be authorised as a central securities depository (CSD), due to Brexit related consequences, it will be necessary for Irish companies’ securities held in their current CSD in Euroclear UK to be migrated to another EU based CSD. The Migration of Participating Securities Bill was published on 20 November 2019.

This Bill will facilitate the migration of these Irish listed securities from Euroclear UK. Most countries operate their own domestic CSD but for historic reasons, due to the close links between the Dublin and London stock exchanges, the Irish market regularly relies upon the CSD based in Euroclear UK. This Bill when enacted and in force will allow for a more coordinated migration of the relevant Irish securities to a CSD based in the EU and reduce the legal and administrative burden on issuers. This Bill will also make consequential amendments to certain provisions in the Companies Act 2014 to take into account the changes in the settlement model.

The Finance (Tax Appeals and Prospectus Regulation) Bill 2019 was passed by the Seanad on 3 December. We expect this legislation to be enacted soon.

We are waiting for some pending legislation to make its way through the Houses of the Oireachtas and to be enacted. We will keep you updated on any further developments on these Bills.

2019 has not been a stellar year for the Irish equity capital markets, with a number of companies taken private, including Independent News & Media plc, Green REIT plc and SCISYS plc, itself a recent and unusual Brexit inversion entrant to the Irish market, and with only one successful IPO, that of Uniphar plc. With IPOs generally in declining numbers in the US and in the UK, and recent failures such as WeWork and the fairly muted response to reputed valuations desired by the selling state shareholder of Saudi Aramco, now coming only to the local Tadawul stock exchange in Riyadh on 3 December 2019, together with an uncertain political backdrop, we think the Irish equity capital markets will probably track global trends and the uncertain outlook. It also remains to be seen whether or not the exit from the EU of CREST and the necessity for Irish public companies to migrate to the unfamiliar Euroclear platform for uncertificated trading will have any positive or negative effect on the market generally.