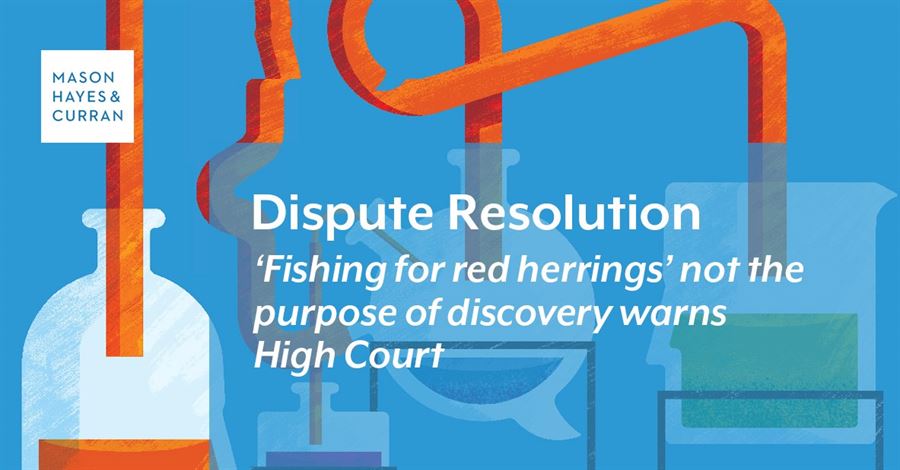 In a recent case, Elaine Bergin and Stephen Bergin v Permanent TSB plc[1], the borrowers argued that the defendant bank had a duty to advise them of their contractual rights. In particular, they contended that the implications of switching from a fixed rate of interest to a variable rate on their home loan should have been explained to them. The substance of the claim was that the plaintiffs were not provided with the advice which they should have been, and so found themselves bound to pay a higher rate of interest.

The plaintiffs’ solicitors sought voluntary discovery of six categories of documents which were said to be relevant and necessary for the “conduct of the plaintiffs’ case and/or for saving costs.” These categories included requests such as “Any documents relating to any product portfolio analysis carried out by the defendant bank of its tracker products in or about 2008 or/early 2009.”

When the defendants’ solicitors declined to make discovery, a motion for discovery issued. In response, the defendants swore an affidavit challenging the relevance and necessity of the discovery sought. They protested the failure of the plaintiffs to link the categories sought to the pleadings; and pointed to the failure of the plaintiffs to have made any effort to obtain the information sought by other means. Furthermore, the defendants’ solicitor deposed that the discovery request was disproportionate in circumstances where there was only a possibility that the documents would be relevant to the issues which might arise at trial. It was claimed that compliance with the request would entail the searching of more than 700,000 documents; the vast majority of which would be irrelevant and unnecessary to the determination of the proceedings. Finally, on the question of costs, the defendants’ solicitor claimed that the discovery sought by the plaintiffs would significantly increase costs.

In relation to four of the six categories of discovery sought, the High Court pointed out that all four category requests commenced with the words “Any documents”. The court held that the use of the word ‘any’ betrayed “at least a lack of confidence that the documents existed and gave the impression of fishing.” Further, Mr Justice Allen was of the view that discovery of these four categories would neither assist the plaintiffs in making their case that the defendants had a policy in place of encouraging borrowers to switch their interest rates, nor would it damage any case the defendant might have made that there was no such policy in place. Ultimately, the court noted that these categories of documentation requested constituted not only fishing, but “fishing for red herrings”, and were not relevant “still less necessary for the fair disposal of the action.”

In relation to the remaining two categories of discovery sought, the High Court similarly refused to grant discovery of these categories on the basis that they did not form part of the case pleaded, and were based on ‘contentions’ of the plaintiff, which might be proved to be incorrect. For example, the requests included “Any documents relating to the defendant bank’s decision to desist from offering a tracker mortgage product in or about October 2008 – April 2009.” The court highlighted that the question of relevance of documentation in a discovery request must be determined by the pleadings in the specific case, and not by reason of submissions to alleged facts or contentions put forward in affidavits. Judge Allen ultimately concluded that the plaintiffs had failed to meet the threshold requirement of establishing the relevance of the documents sought and therefore the alternative issues of necessity and proportionality did not arise.

This judgment serves as a sharp and timely reminder to all litigants that the discovery process is not to be viewed as an opportunity to conduct a ‘fishing expedition’ of all of the documentation belonging to an opposing party. The courts will take into account the costs and practical consequences of conducting discovery and will only grant it in circumstances where a particular request corresponds with the original pleadings in the matter.

In addition, before discovery is ordered, the court will have to be satisfied that the documentation in question is relevant to the matters in dispute. The court will not order discovery simply because there is a possibility that documents may be relevant. When drafting discovery requests in the future, practitioners and litigants should be aware of the principles affirmed by this judgment and the dangers of drafting requests for discovery commencing with the words “Any documents…”

For more information, please contact a member of our Dispute Resolution team.