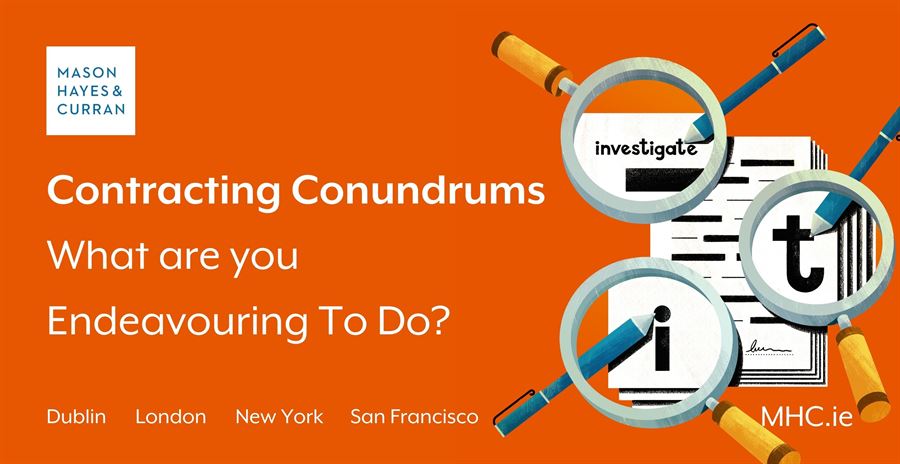 Contractual obligations such as you “shall” or “will” do something are absolute with the result that a failure to satisfy the obligation is a breach of contract. In order to mitigate this, the parties will frequently qualify an obligation to agree a “middle ground” by stating that a party must only use its best endeavours, or other variations like reasonable endeavours or all reasonable endeavours.

This helps progress negotiations, but introduces uncertainty into a contract. This is because it is not always clear what lengths a party must go to comply with an endeavours obligation.

We’ve set out some tips below to help you better understand the difference between some of the main formulations used. It is important to remember, though, that any contractual provision will always be construed on its own terms and contractual and factual matrix. The duty to be performed must also be gauged by reference to the facts available to a party at the time of performance. This means that the same expression does not always mean the same thing!

This represents the most onerous endeavours type obligation, with a similar variation being “ultimate endeavours”.

A best endeavours obligation was historically interpreted to mean that a supplier would leave no stone unturned when attempting to comply with its obligations under a contract. More recently, the UK Courts have found best endeavours to mean a supplier must take: “all those steps in their power which are capable of producing the desired results… being steps which a prudent, determined and reasonable [customer], acting in his own interests, and desiring to achieve that result, would take”.

This is a high threshold, particularly as you look at what a customer, acting in its own interest, would do to achieve the desired result, rather than what the supplier, who is subject to the obligation, would do. Needless to say, a customer is likely to do more than the supplier would and this limits the extent to which a supplier can have regard to its own personal circumstances and interests in deciding what it must do. However, the reference to a “reasonable” person shows that it is not an absolute obligation.

The English Courts in Jet2.com v Blackpool Airport Limited extended what a ‘best endeavours’ obligation can mean to include an obligation on the supplier to sacrifice its commercial interests. This can include some level of financial hardship, though it probably does not extend to complete disregard for the company’s financial interests (Terrell v Mabie Todd and Co. Limited). This is important as people often claim in negotiations that a best endeavours obligation could result in their financial ruin – that’s probably an overstatement but it can still involve significant expenditure so should be agreed to with caution.

A best endeavours obligation has been held to require a person to litigate or appeal a decision.

This is a murky middle-ground. It is a compromise between the extremes of ‘best endeavours’ and ‘reasonable endeavours’ clauses and has elements of both.

It is generally thought that a supplier using ‘all reasonable’ endeavours must explore all avenues reasonably open to it, including where this involves expenditure.

An important question is whether the supplier can have regard to its personal circumstances in determining the steps it will take to comply with the obligation or, instead, should it be looked at from the customer’s perspective. The case law is inconsistent in this regard. It can’t be ruled out that the supplier may have to sacrifice its commercial interests at least to some extent, though it is probably entitled to have greater regard to its own commercial interests than in the case of a “best endeavours” obligation. Given the uncertainty, if it’s an important clause, it’s best to make clear from whose perspective it is looked at.

This type of endeavours clause imposes the lowest level of obligation on a supplier.

The leading English case of Rhodia v Huntsman suggests that you only have to take a single course of action to achieve a particular aim to satisfy this obligation. What is more, it appears that the supplier can have primary regard to its personal circumstances and interests in deciding what it must do. Whilst it may require limited expenditure, the supplier is not required to sacrifice its commercial interests (P&O Property Holdings Limited v Norwich Union Life Insurance Society). In one case, the Court considered that the “chances of achieving the desired result” would be of prime importance (UBH (Mechanical Services) Ltd v Standard Life Assurance Company), which suggests that if a positive outcome is unlikely, you don’t have to take that course of action.

However, it still requires you to take certain action and is not toothless.

Courts will always try to interpret a contract by reference to what the parties intended. Therefore, the starting point for interpretation will be reading what the terms of the contract actually say.

In a more heavily negotiated contract, that tactic is unlikely to work and introducing a global definition may be more work than its worth. An alternative is to provide more certainty in a specific clause as to the minimum steps or maximum expenditure etc. to be taken to comply with the obligation where this is important.

Some things to think of when setting out what fulfils an endeavours clause include:

The contents of this publication are to assist access to information and do not constitute legal or other advice.