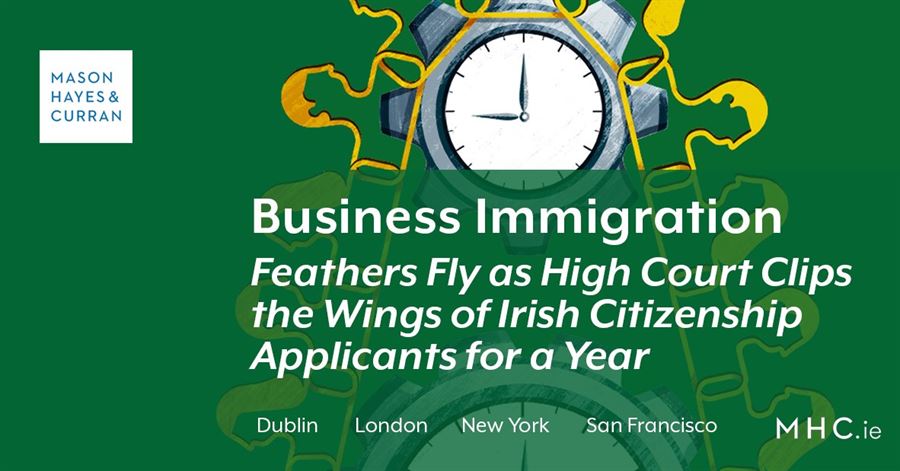 Mr Justice Max Barrett recently ruled that the “continuous residence” requirement in citizenship applications means an applicant for naturalisation must have “unbroken” residence in the State for an entire year immediately before the date of their application.  He held that the word “continuous” was to be given the literal meaning and breaks were not allowed.

In previous citizenship applications, the Minister for Justice and Equality has applied a discretionary practice of allowing applicants six weeks out of the country. This provides the applicant the opportunity to travel for work, take a foreign holiday or travel abroad for other personal reasons up to a period of six weeks.  Additional time can be given in exceptional circumstances.

Mr Justice Barrett has ruled however that this is not provided for by law. While he admitted that this “might seem unfair” in a world where many people travel abroad for work and take foreign breaks, it is what the relevant law requires.

Mr Justice Barrett made the findings when rejecting a challenge by Roderick Jones, from Australia, to the Minister’s refusal of his application to become a naturalised Irish citizen.

The Minister, in a decision of November 2018, refused Jones’s application because he was out of the country for more than the discretionary absence period of six weeks. Mr Jones challenged that refusal in judicial review proceedings.

However in ruling on the case, Mr Justice Barrett went further than the State was seeking, ruling that the six weeks discretionary period applied in other cases has no basis in law. An outcome which neither party, including the Minister, wanted from the proceedings.

The cure for any such unfairness is not to be found in the courts, it “lies in the gift of the legislature”, said Mr Justice Barrett. In addition, by applying a discretionary absence period to allow for the realities of modern life, the Minister has “unfortunately gone beyond what is legally permissible”.

The Department has issued a statement assuring citizenship applicants that they are taking all appropriate steps to remedy the situation as quickly as possible. The Citizenship Division is continuing to receive and process applications. Further, planning for the next Citizenship Ceremony in September is also underway.

An appeal has already been filed by Mr Jones against the High Court’s decision and was given priority when it came before the Court of Appeal for case management on 25 July 2019.  The matter is to be heard by the Court of Appeal on 8 October 2019 which would be considered a very early hearing date.

Also on 25 July 2019, the Minister for Justice and Equality obtained Cabinet approval for a proposed bill, which seeks to resolve the issue that has arisen.

The Minister’s intention is to work with the Office of the Attorney General and instruct the Office of Parliamentary Counsel to have a bill drafted on an urgent basis and before the Houses of the Oireachtas for consideration in mid-September.

The Department are not advising citizenship applicants or future applicants to cancel any current or upcoming travel plans and the advice for people who are planning to apply for citizenship is to continue to collect all the necessary proofs that support their application and to submit a comprehensive application form.

It is not considered that the ruling has consequences for anyone who has already obtained citizenship under the Act.

While it remains unknown how far the proposed new legislation will have progressed ahead of the Court of Appeal hearing on 8 October 2019, like birds of a feather the appellant and the respondent will be sticking together, an unusual sight in any courtroom.

For more information on how this decision may impact you or your employees, contact a member of our Business Immigration team.