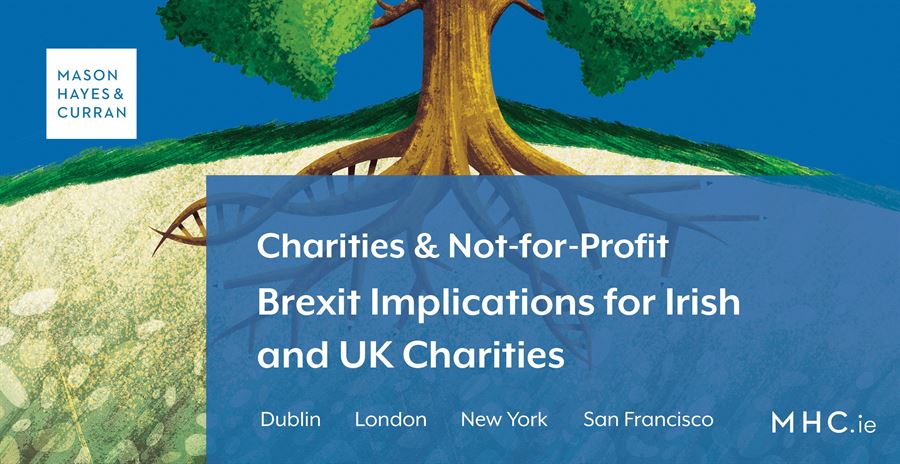 One possible opportunity stemming from Brexit for Irish charities is that more funding opportunities may become available from the EU if organisations based in the UK become ineligible for EU funding.

Irish charities may find that UK charities that work in a similar area are establishing an office in the Republic of Ireland in order to retain eligibility for EU funding. In these circumstances it may be worth considering whether to collaborate with these charities and enter into a formal cooperation or collaboration agreement.

Irish charities may additionally see fluctuations in sources of income and funding. One possible consequence of Brexit could be a reduction of average disposable income in Ireland, and as a result there may be a reduction in the level of donations to charities. In addition, Government funding priorities may change as a result of the response to any fallout from Brexit.

It is important for UK charities that receive EU funding, or that intend to apply for EU funding, to carry out an analysis of their continued eligibility and to conduct a risk assessment of the potential impact of Brexit. Some UK charities are currently establishing offices in the Republic of Ireland as a result of these risk assessments.

The UK Government has recently issued a guarantee on funding from Creative Europe, Europe for Citizens, and Connecting Europe Facility in Telecoms. The Special EU Programmes Body has also provided reassurance regarding PEACE IV and INTERREG funding until 2023. We are monitoring these developments.

If your charity has conducted a risk assessment and has found that its funding is in jeopardy as a result of Brexit, and is not covered by a guarantee from the UK Government, a potential option is establishing an office in the Republic of Ireland. Some funding requirements require a charity to be established in an EU member state for two or three years, so this is a change that some charities may need to consider as soon as possible.

It is important for UK charities that wish to carry out activities in the Republic of Ireland, or that wish to establish an office in the jurisdiction, to bear in mind that they may need to register in advance with the Charities Regulatory Authority in the Republic of Ireland. Serious criminal offences may be committed if an obligation to register is not complied with.

UK charities that already have a subsidiary in Ireland must keep in mind that a company in the Republic of Ireland is required to have at least one director resident in the European Economic Area, otherwise the company must:

Brexit holds risks for both Irish and UK charities and not-for-profit organisations, and it is important to conduct a risk assessment for your organisation of the potential impact that Brexit might have.

We have the largest charities and not-for-profit legal team in Ireland, and we are happy to assist your charity or not-for-profit organisation with advice related to Brexit. For more information about the potential risks for UK charities resulting from Brexit, consult the Irish section of the Advocates for International Development guide “Preparing UK-based NGOs for Brexit” or contact a member of our Charities & Not-for-Profit team.

This article was contributed by Daragh Gleeson.