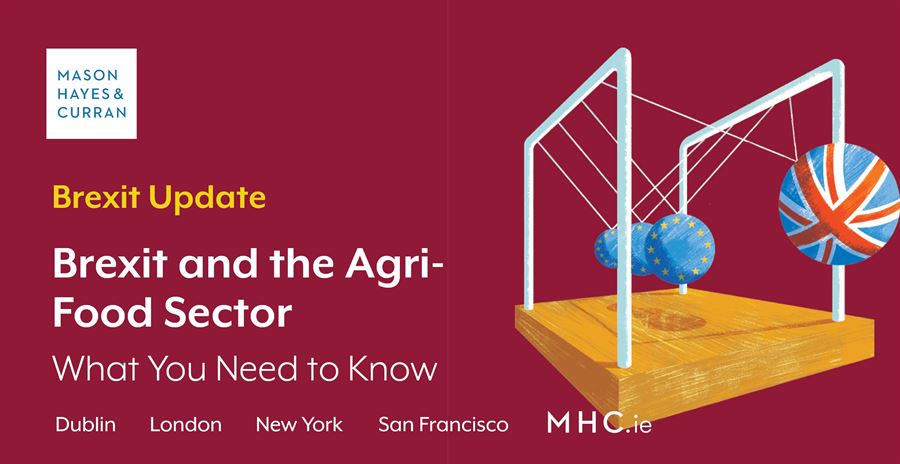 As the end of the UK’s transition period draws near, the agri-food sector has been centre stage of Brexit negotiations. Threats of a food blockade into Northern Ireland, and confusion over food labelling have hit the headlines. When the transition period under the Withdrawal Agreement expires on 31 December 2020, the UK will be outside the EU’s Single Market and Customs Union. Irish agri-food businesses are being urged to prepare for two scenarios: (i) a limited Free Trade Agreement, or, (ii) a hard Brexit, a “no deal” scenario, with the EU and UK trading on World Trade Organisation (WTO) terms.

Either scenario will be highly disruptive. A hard Brexit will mean the introduction of tariffs and quotas on trade into and out of the UK. A free trade agreement may mean no tariffs or quotas on goods, but products traded between the EU and the United Kingdom will still be subject to regulatory compliance checks and controls on imports for safety, health and other public policy purposes. The only certainty is that the way Irish food businesses trade with the UK will change significantly.

Ireland’s food and beverage industry is particularly vulnerable to either Brexit scenario, as 38% of the agri-food industry’s exports in 2019 went to the UK. This is compared to other EU countries who export less than 10% of their produce to the UK.

Challenges facing the industry include:

Many food businesses have already faced major disruptions from COVID-19, and the challenges and uncertainty of Brexit comes at a difficult time for the sector.

There is an extensive body of EU food law which applies to all food sold in the EU, guaranteeing some of the highest food safety standards in the world. Where food is sourced or manufactured outside the EU, the importer must make sure that it satisfies EU law at the time it is brought into the EU. This means that anyone bringing food products from the UK into Ireland must prove compliance with EU food law at the point of entry to Ireland.

Conversely, EU food law will no longer apply in the United Kingdom after the transition period, and – in the absence of a deal – there will be new and potentially different UK rules applying to food products exported from Ireland to the UK.

Further complicating the situation is the position of Northern Ireland, which will for the purposes of food law be treated as if it were a Member State, even though Great Britain (“GB”) will not. We will look briefly at the Northern Ireland protocol as applies to the food sector, after considering imports from and exports to the UK.

Imports into Ireland from the UK

For food brought from mainland UK into Ireland after 1 January 2021:

There will be further restrictions on the import of food of animal and plant origin from the UK into the EU. The Official Controls Regulation (in force in the EU since December 2019) provides for controls by the EU Commission in Members States and third countries on hygiene and health standards for food, feed, animal products and plants. The UK will be considered a “third country” for the purposes of the Official Controls Regulation unless it is “listed” as an approved country, and stringent border controls would then apply.

The UK has not yet been "listed" by the EU Commission for the purposes of the Official Controls Regulation, and the EU Commission will not do so until the UK publishes its proposals for food and plant safety post transition period. This issue erupted into a major political dispute in September 2020, with the UK claiming that the EU could create a food blockade between GB and Northern Ireland at the end of the transition period. For now, the UK has agreed to the EU demands for further details of the UK’s animal health and food safety regime in 2021, and the threats of food blockades have receded – though maybe only temporarily.

Exports from Ireland to the UK

For food that Irish producers want to sell to mainland UK after 1 January 2021, many of the above issues apply in reverse. For instance:

Exporters from Ireland to UK are urged to check the UK certification requirements that will apply to specific products. These are published by UK food authorities, and are subject to change right up to the end of 2020.

Irish business that want to import or export animals, plants, or products of animal (including fish) or plant origin (including wood products) from or to the UK (excluding NI) from 1 January 2021 must be registered with the Department of Agriculture, Food and the Marine, and importers must also be registered on TRACES, an EU Commission system for the electronic completion of documentation required for imports of certain consignments from third countries.

Certain higher risk foods of non-animal origin also require an export certificate, as detailed by the Environmental Health Service of the HSE. Further details are available in the Government’s Brexit Preparedness Checklist for Businesses moving Animals, Plants, and Products of Animal and Plant Origin, last updated in August 2020.

Northern Ireland and the Food Sector

The IE/NI Protocol provides that EU food law applies to Northern Ireland, even though the rest of the UK may be considered as a “third country”. Most importantly for Irish food businesses, there will be no change to the current procedures for trade in food between Ireland and Northern Ireland. There should be no new paperwork; no tariffs, quotas or checks on rules of origin; or any barriers to movement on good between RoI and NI, and NI and the rest of the EU.

However, the impacts of the IE/NI Protocol are that:

Food products being sold from Ireland into the UK may face customs duties or tariffs. The UK recently announced their UK Global Tariffs system (UKGT) which will apply to most imports into the UK from 1 January 2021 in a “no deal” scenario. For an outline of the tariff regime, as well as important information on changes to VAT arrangements for Irish exporters to the UK, see our article Brexit, Tax and Food here.

In September 2020, the Irish Government published A Brexit Readiness Action Plan to assist Irish businesses prepare for the end of the transition period and the likelihood of a “hard” Brexit under WTO rules. The Plan has provides useful advice and information resources on importing and exporting after January 2021, with specific recommendations for the agri-food sector.

While there are still many uncertainties about Brexit, and whether there will be a deal or FTA, we would encourage all businesses in the food and beverage industry who trade in any way with the UK to:

For more information on the likely impact of a no deal Brexit on your business, contact a member of our Food, Beverage & Agriculture teams.