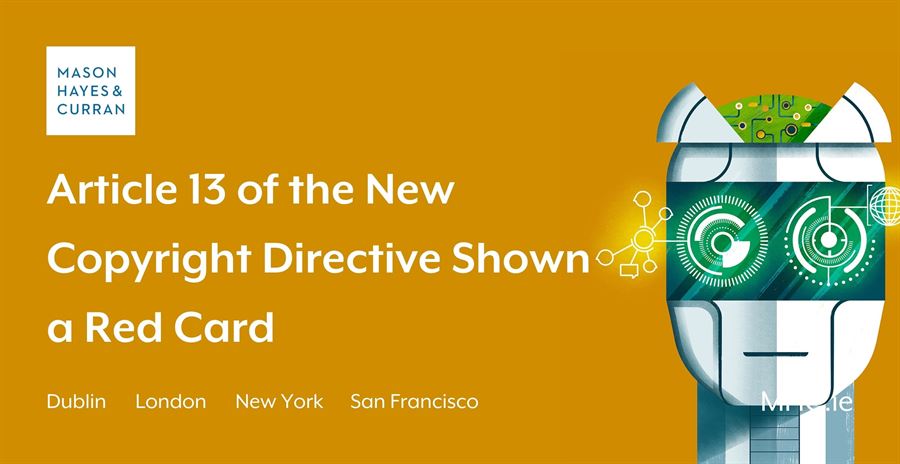 On 5 July 2018 627 of 751 members of the European Parliament voted on the proposed Copyright Directive, with 318 voting to reject articles 11 and 13, the link tax and upload filters, respectively.

This rejection appears to validate industry views. Recently, 70 influential tech leaders, including Vint Cerf and Tim Berners-Lee, signed a letter opposing Article 13 of the proposed new Copyright Directive, which they called "an imminent threat to the future" of the internet.

An expert committee of MEPs recently voted to accept major changes to European copyright law (draft text here), which some technology experts argue could change the nature of the internet. Included in the new Directive is the much-maligned Article 13, which critics warn could put an end to memes, remixes and other user-generated content. One organisation opposed to the changes called it a "dark day".

"This is a strong and unambiguous message sent by the European Parliament. It clarifies what the music sector has been saying for years: if you are in the business of distributing music or other creative works, you need a licence, clear and simple. It's time for the digital market to catch up with progress."

What is the potential effect of Article 13?

Article 13 seeks to put the onus on websites to enforce copyright in content uploaded by users and could mean that every online platform that allows users to post text, sounds, code or images will need some form of content-recognition system to review all material that users upload as well as a fresh approach to a takedown procedure. This is a change from the existing notice and take down procedure under the eCommerce Directive which is responsive. The system proposed under Article 13 will require the website owner to take proactive steps.

Who is it directed at?

The Directive and Article 13 is directed at online content sharing service providers (OCSSP) which is any online service provider whose main or one of the main purposes is to store and give the public access to a large amount of works or other subject-matter uploaded by its users which it organises and promotes for profit sharing purposes. This is of course a very broad definition and captures many online players in the content space. However, internet service providers, private cloud service providers and online marketplaces whose main activity is online retail are considered out of scope (see Recital 37a).

What are the details of Article 13?

The latest text is the draft of 23 April 2018 and sets out 8 paragraphs in Article 13. The main points are as follows:

While the proposals as drafted have been rejected, this isn’t the end of the two articles or the Directive, which will now be discussed in Parliament in September. Overall, the negotiations have no formal timeline but some commentators have suggested that Parliament will press for an agreement on a final version before the end of the year which now appears to be ambitious. This version will then have to be approved by both the Council and the Parliament. The current draft then allows Member States 24 months to transpose the final text into national legislation. However, this latest setback could interrupt those timelines and plans.

It’s difficult to argue against the main points being made by the tech industry; the Directive is a massive shift from the current copyright environment. There will be significant investment in resources and costs to design and operate the filtering technology and take down and complaint procedure. Before any of that can happen major Commission and industry (both the OSCCPs and rightholders) engagement is required to agree a scope for what appropriate measures and what best efforts (an expression that has different interpretations in common and civil law jurisdictions) might look like. Reasonable agreement on these measures and a softening of the drafting in sub-article 1 regarding the ban, in particular, may result in progress. A further complication lies in the variance in the scope of Member State copyright exceptions and how that might affect the availability of content on a Member State by Member State basis.

For more information on Article 13 or the Directive, contact a member of our Intellectual Property or Technology teams.