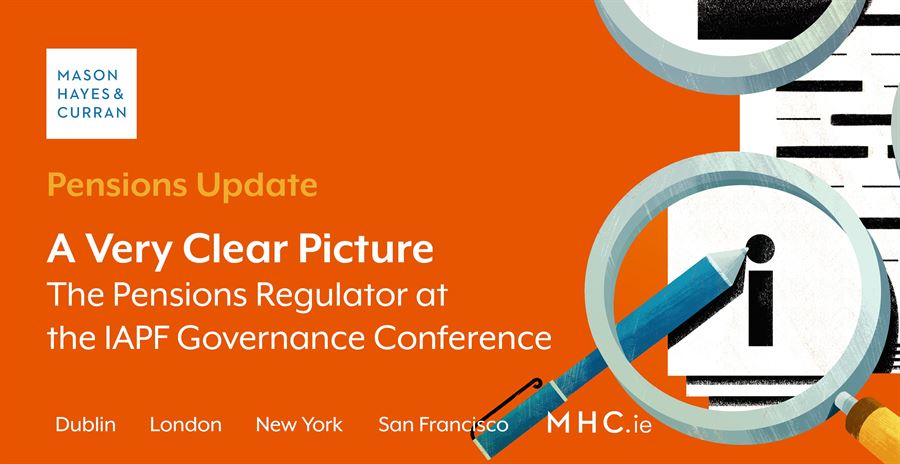 Over the course of the year the Pensions Regulator (Regulator) has continually pointed to prevalent shortcomings in trustee cultures and accepted behaviours. At the IAPF Governance Conference, he provided an unambiguous insight into the new standards that will be expected from trustee boards.

In his presentation, the Regulator once again emphasises the significance of the transposition of the IORP II Directive (Directive) for the Irish pensions industry. He states that “IORP II is not just a new set of tasks added to trustees’ existing work”. The Regulator notes that while the Pensions Authority’s present work will continue, such as ensuring scheme compliance and applying sanctions, the future will see the Pensions Authority focussing on trustees’ management and governance of their schemes. The aim is to ascertain if certain board cultures and behaviours “pose a risk to the future interest of scheme members and beneficiaries”.

In referring to ‘culture’ the Regulator means the attitudes, values, practices and expectations that will determine the performance of a trustee board. He notes that trustees too often see their role as a series of “tasks to be ticked off”. Instead the Regulator sees trusteeship as a role, meaning that it does not involve an objective standard or set of rules and that each trustee board must be proactive in identifying what needs to be done for their own schemes.

On a number of occasions in his presentation, the Regulator reminds trustees that they are looking after other people’s money. He adds that members and beneficiaries are entitled “to expect that this role will be carried out to a high standard and with their best interests as the priority”. As well as proactively identifying the decisions that need to be made and making those decisions, trustee boards must continually monitor the effect of their decisions. Once again, the Regulator is putting the focus solely on member and beneficiary outcomes here and putting the responsibility for those outcomes squarely on the shoulders of trustee boards.

The Regulator notes that many trustee boards have not engaged with the requirements of the Directive in any material way. He acknowledges that many boards may not wish to spend money on advice, or implementing changes before transposing regulations are published, but does not accept that the delay in transposition should mean inactivity on the part of trustees. The Regulator is definitive in assessing this lack of activity, he states that “[if] you are a board of trustees who only do something when it becomes a legal obligation, you are not a good board of trustees and you do not understand your role. This is what I mean by culture change”.

At the IAPF event, the Regulator also confirmed that Pensions Authority guidance on the Directive would not be available until it was transposed into Irish law. The Regulator confirmed that the Pensions Authority would review publishing drafts of the regulations as soon as they were made available and that the guidance would then be prepared after a consultation process has been completed.

In referring to the objective of any such guidance the Regulator noted that its purpose will be to “add additional detail to what will be in the directive, obviously that in itself is a function of what the directive specifically says”. However, the Regulator added that the Pensions Authority’s supplementary guidance will set out some of the finer provisions included in the new regulations.

The Regulator’s presentation at the IAPF Governance Conference gives us a very clear picture of what will be expected from trustee boards in the very near future. It is essential that boards consider what needs to be done in the coming weeks and months and to begin remedying any deficiencies in board conduct and procedures as soon as possible, as well as obtaining advice on the Directive where it is deemed necessary.

For further information regarding compliance with the IORP II Directive, contact a member of our Pensions team.