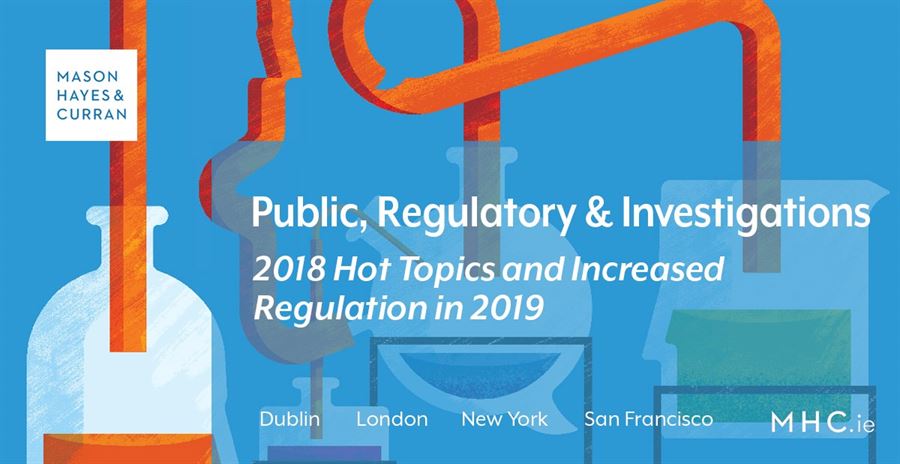 We look at developments in public procurement litigation; data protection and community-based CCTV schemes; financial regulation and sanctions in professional regulation; and a new requirement at public body level to disapply national law, and apply EU law, where the two are in conflict.

Public procurement was a hot topic in 2018, with the awarding of two significant contracts being challenged in the courts.

In the Word Perfect case decided in June 2018, the Court of Appeal reiterated that, in cases relying on manifest error by the contracting authority, the Court will afford a margin of discretion. It will only interfere where the contracting authority commits a manifest error and clearly fails to respect the principles of equality, transparency or objectivity. In interpreting tender documents, the Court will apply the ‘reasonably well-informed and normally diligent tenderer’ (“RWIND”) test. We discuss the likely impact of this decision in greater detail.

In a subsequent High Court decision in October 2018 in which Mason Hayes & Curran acted, Transcore, LP v National Roads Authority, the High Court applied the same principles and the RWIND test to the case before it.

The Court held that, eventhough a “degree of concern” regarding individual aspects of a response to a particular criterion, the tendering authority could nevertheless properly score the overall response on the criterion in a “no concerns” scoring category. The tendering authority could do so, where its evidence was that it, in fact, had no concerns in respect of the overall response. The authority could also properly award 9 out of the 10 available marks in the “no concerns” category to reflect the degree of concern it felt on the relevant individual aspects.

The GDPR came into effect on 25 May 2018. The steps required for compliance are onerous, and have caused many challenges for both data controllers and processors. The GDPR applies to both public and private organisations. However, there are some key differences for data controllers in the public sector, and we discuss some of these differences here.

Following the implementation of the GDPR, the Data Protection Commission has issued guidance on data protection law throughout 2018. Recent guidance concerns community-based CCTV Schemes, which helpfully addresses the mistaken perception that such schemes are encountering data protection difficulties and are unable to proceed. This guidance is available here.

In early December 2018, the Minister for Justice welcomed this guidance from the Commission. Minister Flanagan’s statement can be accessed here.

There is a noticeable trend of increasing financial regulatory enforcement by the Central Bank of Ireland. An important aspect to this was the Court of Appeal’s decision in the case of Michael Fingleton v The Central Bank of Ireland, in April 2018.  The Court affirmed the High Court’s decision that the Central Bank’s administrative sanctions inquiry into the former CEO of Irish Nationwide Building Society - the first one it has ever held - could lawfully proceed. This was on the basis that a “person concerned in the management” of a financial service provider included a person who was no longer concerned in its management, but who was so concerned at the relevant time.

It has also been a busy year for the newer professional regulators, including the Teaching Council of Ireland and CORU, the health and social care regulator.

In August 2018, the Teaching Council brought its first application in the High Court to confirm the imposition of sanctions on a teacher. The High Court confirmed the sanction of removal of the teacher’s name from the register following findings of professional misconduct by the Teaching Council in respect of allegations that the teacher applied adhesive tape to the mouths of five students.

The High Court judgment also revisited the question of the extent of the Court’s jurisdiction when confirming a sanction on a professional. The Court referred to previous jurisprudence in the area, particularly the judgment of President Kelly in Medical Council v MAGA and confirmed that the Court’s function in determining whether to confirm the sanction imposed by a regulator is a restricted one, and does not allow for an appeal on the merits of the case.

In addition, CORU held its first fitness to practise inquiry, in public, into allegations of a radiographer’s poor professional performance and misconduct in September and November 2018.

In a landmark judgment delivered on 4 December 2018, in Minister for Justice & Ors v Workplace Relations Commission & Ors (“WRC”), the Court of Justice of the European Union (“CJEU”) has ruled that bodies with a function of ensuring that obligations stemming from EU law are implemented and complied with, are permitted to find that national law is contrary to that law.  Therefore, they may decide to disapply national law. This is required because of the primacy of EU law, and to render the EU rules in the relevant area effective. The fact that Irish constitutional law permits and requires individuals to bring an action before the High Court to find that the relevant national provision is incompatible with EU law, and allows the High Court to disapply the national provision at issue, and thereby affords a remedy, does not alter this conclusion. Prior to this decision, it was settled law in Ireland that, for constitutional reasons, public bodies could not make a binding declaration of inconsistency or insufficiency when comparing national legislation to EU law; it was considered that, under Article 34 of the Constitution, only the High Court could disapply national law in this way.

High-value public procurement litigation continued in 2018, with the courts displaying a willingness to afford contracting authorities a wide margin of discretion when awarding contracts unless a manifest error and a clear failure to respect the principles of equality, transparency or objectivity were apparent in the decision. The Word Perfect case shows that, in a clear case, the courts will interfere, and underscores the fact that careful interpretation and proper application of tender documents is critical.

2018 also saw a general trend of increased regulation and regulatory enforcement in a number of fields, including financial and professional regulation, and data protection.

Finally, at the end of 2018, in the WRC case, the CJEU ushered in a major, expansive, change to the jurisdiction of bodies charged with ensuring the implementation of, and compliance with, EU law. This will cause a sea change in the way that such bodies carry out their functions, and heralds a fundamental alteration in the previously-settled law in this regard in Ireland.

The trend of increased regulation is expected to continue in 2019. The Central Bank’s administrative sanctions investigations into a number of the major banks’ treatment of tracker mortgage customers is due to be partially completed in 2019. The Governor of the Central Bank recently publicly stated that some of the banks being inquired into can expect to receive multi-million euro fines in 2019.

We also expect a continued increase in professional regulation, with some of the newer regulators starting to exercise their statutory powers.

For more information on regulatory challenges facing your organisation in 2019, contact a member of our Public, Regulatory and Investigations team.

Public & Administrative Law Update: GDPR – What to Know Before 25 May 2018

Procurement Update: What’s In a Word? A Lot - According to a Recent Decision