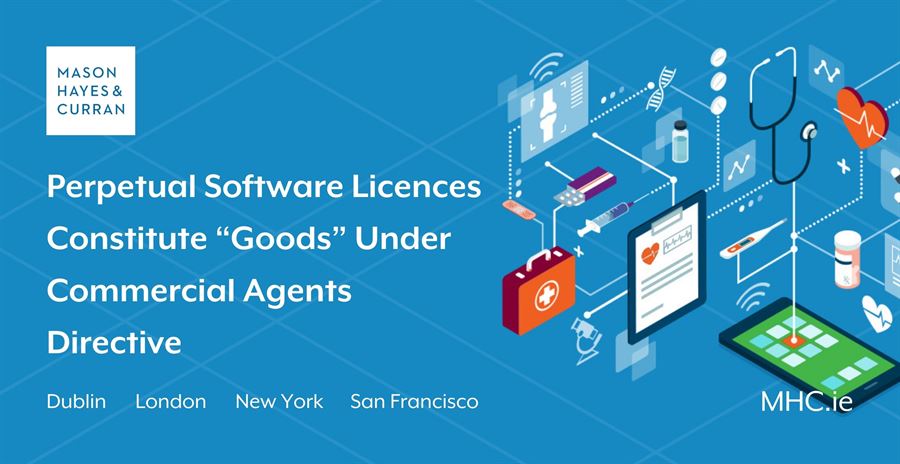 The Court of Justice of the European Union (CJEU) recently delivered its judgment Case C-410/19 The Software Incubator Ltd v Computer Associates UK Ltd. The case brings some clarity to the meaning of “goods” under the Commercial Agents Directive 86/653/EC (the Directive).

What is a commercial agent?

Importantly, the Directive only relates to where a commercial agent negotiates the sale and purchase of goods and does not include services. There has been much debate as to what constitutes “goods” under the Directive, with particular uncertainty on the position of software. Case law from England, which is not binding in Ireland but can be persuasive, established that, for the purposes of its Sale of Goods Act 1979, software did not constitute “goods” on its own, but it could constitute “goods” if it was supplied on a durable medium, like a disc. This analysis has obviously become relatively redundant due to developments in how software is delivered to customers.

Consequences of being a commercial agent

Classification as a commercial agent has important consequences as commercial agents are granted rights under the legislation which would not normally be freely agreed to. The most important of these is that commercial agents are entitled to compensation on the termination of the agency relationship, subject to certain exceptions. Additionally, where the agency agreement is for an indefinite term, or has become for an indefinite term, the Directive provides for certain mandatory termination notice periods.

In its ruling, the CJEU defined goods broadly as “products which can be valued in money and which are capable, as such, of forming the subject of a commercial transaction”. The Court also confirmed that software could be classified as “goods” regardless of whether it is provided on a durable medium or by download.

The principal implication of the ruling is that resellers of software may fall within the scope of the Directive which brings significant changes in the rights and obligations of the parties from that under an ordinary commercial agreement.

It is advisable for all software licensors who use resellers to review their contracts in light of the ruling and also to consider its implications where it may be considering, or are in the process of, terminating its relationship with any existing software resellers. This is particularly important owing to the risk of having to pay compensation to the resellers on the expiry or termination of the reseller agreement. It is also important in the context of the legislatively required notice periods, where the agreement for an indefinite term or has extended past its initial fixed term.

For more information, contact a member of our Commercial or Technology team.

.(JavaScript must be enabled to view this email address)